Returning to Fun with Gourds

After so much painting - and also a lot of drawing which I haven't been posting - it was definitely time to go back to 3D work, and I was inspired to create a gourd for the 3D show coming up in January.  Now that I'm done with it I like to too much to part with it.  So it may or may not go into the show after all.  A ridiculously high price with solve the possibility of selling it, but it's probably not worth worrying about at all given how poorly art has been selling lately.

I always find it exciting to combine painting with 3D.  For the lid handle, I sculpted a little rabbit from polymer clay.  She has a small madiera citrine in her forehead and is resting her paw on a rock crystal sphere.  Thank goodness for two part epoxy glue!

I designed the spaces for the rabbit portraits between intertwining bands which are supposed to reminiscent of celtic knots.  The space at the very top under the sculpted rabbi, as well as the triangles between the bands, are filled with gold leaf.  I painted the rabbit portraits with soft body acrylic then glazed the backgrounds with interference green/orange acrylic.

To finish it, I added a band of script around the bottom.  It's Theban script, and a transliteration of "European brown hare, fear or caution, a personal choice" which reflects some of the symbolism associated with this animal.

Posted by Kaaren at 5:52 PM No comments:
Email ThisBlogThis!Share to TwitterShare to FacebookShare to Pinterest

Chip Gets an Upgrade 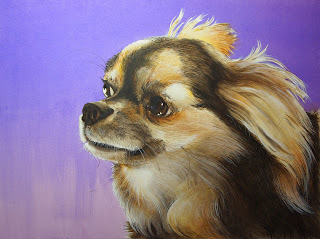 Here's Chip after more work.  Actually, I can't think of anything else to do other than strengthen the whiskers and maybe add more.  The colors in this photo look so different from the previous one.  I haven't made any changes at all in the background yet this looks a lot more blue.  I guess it must be the light when I took the photo.

I'm pretty happy with the way the fur turned out with this technique, so I won't hesitate to use it again for furry animals.﻿
Posted by Kaaren at 5:51 PM No comments:
Email ThisBlogThis!Share to TwitterShare to FacebookShare to Pinterest

A Portrait of Chip 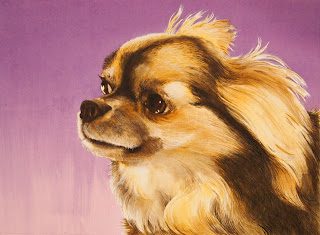 I'm doing this little portrait of Chip on commission and it will be a Christmas present for Chip's doting mistress.  He is a long-haired Chihuahua, and I love this photo that Chip's Dad took of him.  I think the fluffy hair on Chip's ears make him look a bit like a Viking!
I'm using Carel's technique again - acrylics worked like watercolor on Strathmore Illustration Board.  I wanted to see how I could do portraying fur with this tecnhiqe.  So far I'm pretty pleased, but I've got quite a ways to go.  I've used only three brushes - a 2" was brush, a #0 script liner, and a #12 flat.  Carel likes to use his liner brush on its side for larger areas and it seems to work fine.


As I look at the photo of my painting, I see that the black stripe is not centered on his forehead.  Also, it needs to be wider, and the black areas at the temple need to come further forward.  I'll correct that next time.﻿
Posted by Kaaren at 6:33 PM No comments:
Email ThisBlogThis!Share to TwitterShare to FacebookShare to Pinterest 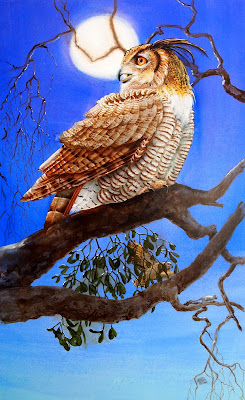 Now it's time to deal with that ugly blob in the sky.  After much contemplation I decided that there was nothing I could do but cover it up, so I added another owl - one flying away - and then partially covered him with more mistletoe.  Once that was done, I finished the branches and added the little mouse.  The most fun part was painting the moonlight highlights on the branches.  I know that the lighting in this painting is not realistic.  The should be a much stronger shadow on all but the very edges of the owl.  I probably should have pushed that farther than I did but I just couldn't bear to cover all those feathers that I worked so hard on.  This painting really looks different depending on the lighting - I prefer it in somewhat dim light.
Posted by Kaaren at 6:26 PM No comments:
Email ThisBlogThis!Share to TwitterShare to FacebookShare to Pinterest 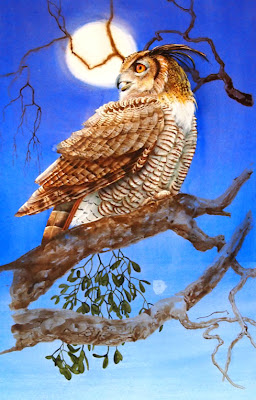 I have been looking forward to beginning this owl painting.  I did the drawing while I was still working on the painting of the mice in the chrysanthemums.  I'm using Carel's technique again.  Unfortunately, I missed my opportunity to photograph earlier stages.  My first step - after I transferred my drawing - was to do the underpainting with Raw Umber, except for the mistletoe which was a mix of Raw Umber and Sap Green.  Like Carel does, I used my #0 liner, most frequently working with lines but sometimes using the side of the brush for larger areas.  Specifically, I used the side on the branches for a nice texture.  And I also used it to shade the feathers.  I notice that the chest feathers lay very smoothly over each other and form large vertical undulations.  So before I began the individual feathers, I shaded to create the larger forms.  After masking the owl and the moon - but not the branches or mistletoe - I used several washes to paint the sky and each wash was a slightly different color.  Successive washes concentrated more and more towards the top of the paper making the lower part of the sky the lightest.  Unfortunately I have a big boo-boo in the sky just to the right of the mistletoe.  While I was working on the underpainting I got paint on my knuckle and smudged it on the paper.  To correct that problem I painted over it with white, not thinking that it would change the way the paper takes washes, so it created this ugly blob.  I'll deal with it later somehow.
Posted by Kaaren at 6:24 PM No comments:
Email ThisBlogThis!Share to TwitterShare to FacebookShare to Pinterest
Newer Posts Older Posts Home
Subscribe to: Posts (Atom)