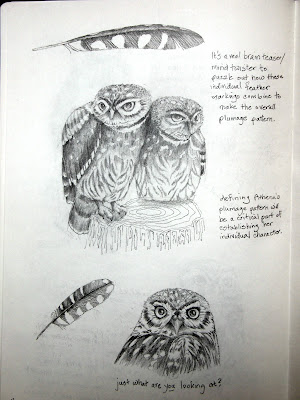 Continuing working in my sketchbook, I turned to drawing owls, specifically, the Little Owl, or Athene Noctura.  Little Owl is a species of owl that lives in Europe and north Africa.  "Athena" is a Little Owl character in the book I'm writing and illustrating, "Milkweed Manor."  If you'd like to follow my progress, in researching and writing as well as illustrating, I invite you to follow my FaceBook page, Milkweed Manor. 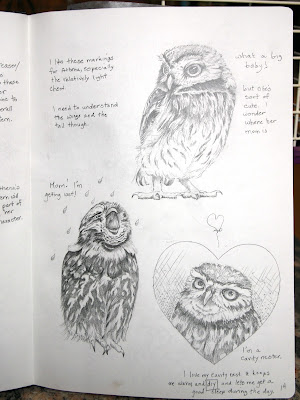 The markings on the owls make them more difficult to draw than the rat.

In my book, Athena appears as both a juvenile and an adult, so I'll have to draw her with juvenile markings that clearly progress to her adult markings.  It's these kinds of considerations that occur to me as I go.  I'm really glad I have this sketchbook going because without it I think it would be extremely difficult, and maybe impossible, to draw convincing and consistent illustrations of these characters.  I'd like to connect with other writer/illustrators.

Posted by Kaaren at 5:19 PM No comments:
Email ThisBlogThis!Share to TwitterShare to FacebookShare to Pinterest 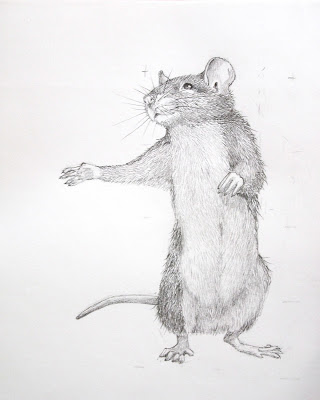 As you can see, Colwyn is a rat, specifically a Norway, or Brown rat.  Colwyn is a member of one of the two most successful mammal species in the world today (the other being humans) and virtually everywhere humans are found, brown rats are also found.

Last spring I wrote the first draft of the book and edited it a few times.  But then I put it aside.  During November I realized that I wanted to work on a long term project and really devote myself to it.  It was difficult to make that decision because it meant giving up on many of the other forms of art I've been doing.  But the way I'm managing that is that I work on Milkweed Manor Mondays through Fridays, then I have the weekend to work on whatever I like.

About three weeks ago I started working in a sketchbook - something new for me.  I felt that it was important to do a lot of drawings of the animals who are my characters.  For my illustrations, I don't just need to draw a rat, but I need to draw Colwyn, a specific and recognizable rat.  So after drawing several rats and noticing the variations in the faces and, less so, the bodies, I will be able to develop the real and recognizable Colwyn. 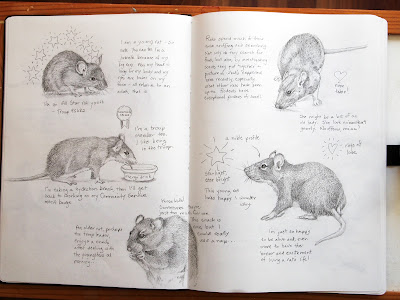