Clarissa Callesen's Class and Beyond 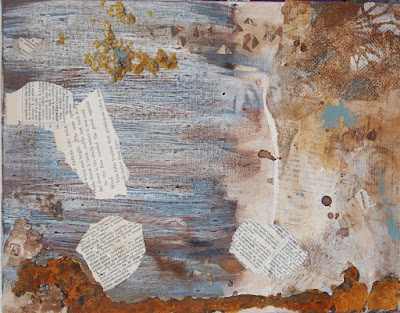 The photo above (except for the four chunks of text which I added later) is the piece I did in Clarissa's class.  It took me a while to figure out that we were just practicing techniques rather than completing a piece.  Once I understood that, I decided to work all the techniques on a canvas board so that I could continue working with it later and completing a piece.

Clarissa likes to use a lot of walnut ink.  But, although I like the color, I'm unlikely to use it again because it dissolves under later applications of water-based paints and mediums.  I'll just use diluted burnt umber or Van Dyck brown acrylic instead.

I was familiar with many of the techniques.  But in this case, we did collage on watercolor paper and I tore it up and collaged it to the board.  It was very thick to collage, but I liked it and would probably use the technique again - that is, collage on heavy paper, then tear it up for further collage.

The technique that was new to me was what she calls "peeling paint."  You see this in the left half of the photo above, the part that is bluish.    She lays a color down and lets it dry.  Then she applied torn strips of painter's tape and paints another color over it.  While the new paint layer is still wet, she removes the tape and lets the layer dry.  She repeats this process as many times as she wants, then sands the result with rough sandpaper.

She also introduced the technique of making what she calls rust "glitter."  She moistens steel wool in white vinegar then closes it in a plastic bag until it disintegrates.  She can then apply the rust powder over adhesive - like glitter! 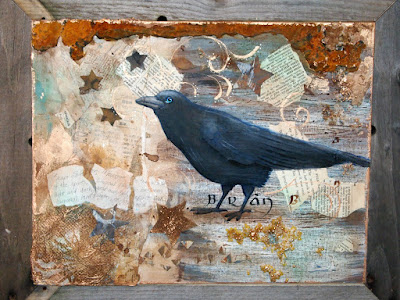 This is my completed piece where I used the class exercise board for the background.  I painted the crow with a layer of thinned Indigo, side-loaded on the brush so that the edges were darker than the center.  Then I repeated with Black.  I added collage elements, included some text that I hand wrote, stars cut from paper painted in a variety of ways - with rust paint, multiple colors, or sprinkled with rust "glitter," and finished it off with accents of Jacquard Lumiere Bronze paint (one of my all-time favorites.)

I framed it with old wood that I've salvaged.  I'm considering painting the tip of the tail over the old wood frame.

Posted by Kaaren at 4:20 PM No comments:
Email ThisBlogThis!Share to TwitterShare to FacebookShare to Pinterest In early April I went for four days to Art and Soul, a mixed media retreat, in Portland, Oregon.  This is one of the two pieces I did in the first class, taught by Doris Arndt.  Doris was actually teaching for someone else who withdrew, so thanks to Doris for filling in.

The project was mixed media beach houses, but I don't think anyone in the class made beach houses.  In this one, I made a butterfly house, but the house is playing rather a bit part.  The things I like about this piece are the delicate colors and, of course, the cat eyeing the butterflies.  This was a fun class, well taught, and increased my appreciation of scrapbook papers which I've seldom used.

I learned that Mod Podge is a good substitute for matte gel medium and that using it with a chip brush was gentle enough to smooth even the tissue paper without tearing it.

The other piece I made was of houses in the forest, but I didn't like it much.