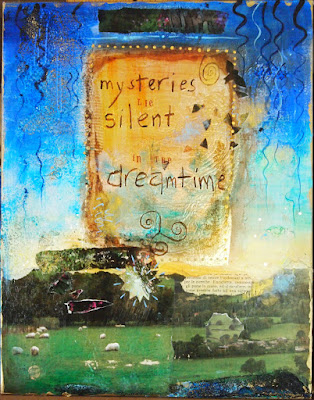 Last weekend, Tesia Blackburn, who is a Practicing Artist with Golden Paints, came to our art club, Placerville Arts Association, and gave both a free lecture on Golden mixed- and water-media products as well as full day workshop with those products.  I went to both.  This is the piece I did in the workshop.

It's collage and painting on an 11'x14' canvas board.  The large golden rectangle is actually aluminum foil adhered to the board with Soft Gel.  The other collage elements are also adhered with Soft Get.  I used glass bead gel and also modeling paste in the blue areas on either side of the foil rectangle.

I incised words and designs on the foil with the end of my brush, then painted over the foil with washes of Fluid Acrylics.  I was hoping that the paint would pool in the incised areas and be darker there, but I couldn't get that to work.  In the end, I painted the incised lines with Van Dyck Brown fluid acrylic and a liner brush.  The most fun I had was highlignting the backs of some of the sheep with white fluid acrylic.  But the whole thing was really a lot of fun.

I usually use Liquitex Mat Medium for "gluing" down my collage piece.  The golden gel we used is gloss.  I'm not sure which I like better.

Posted by Kaaren at 4:59 PM No comments:
Email ThisBlogThis!Share to TwitterShare to FacebookShare to Pinterest 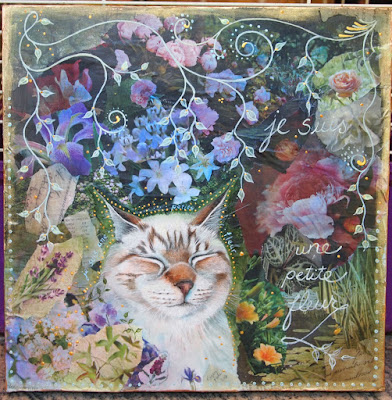 I decided to push back the background, and did so with blue washes.  The wash also toned down the pink in the large peony.  Then I had to re-do the line work.  I decided to add my text in bigger script.  Then I got carried away with all the little gold dots.  I think I liked it better before, but there's no going back.

Posted by Kaaren at 4:53 PM No comments:
Email ThisBlogThis!Share to TwitterShare to FacebookShare to Pinterest 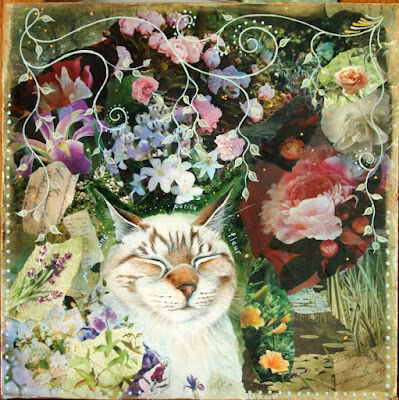 I added washes to the background to try to reduce the "spottiness" of the flowers, then added some line work and dots.  I used a light green and gold.

I wanted to add the text "je suis une petite fleur" but kind of lost my nerve and finally put it in around the cat's hear in very tiny turquoise letters.

As I look at the piece, I'm still bothered by the isolated pinks in the flowers to the right.  In general, I'm disappointed with this piece and need to spend more thought time on what I can do to fix it - but fix what, exactly?

Posted by Kaaren at 4:50 PM No comments:
Email ThisBlogThis!Share to TwitterShare to FacebookShare to Pinterest 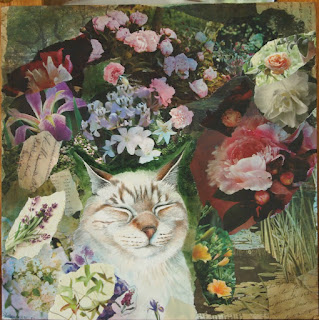 My collage was very spotty, so my next step was to integrate the background with lots of washes.  In some cases, I painted around elements, and in other I painted right over them.

But then I saw that I didn't like the big dark purple blob in front of the cat, so I added a few more collage elements to mostly cover it up.  I also added collage elements to try to reduce the effect of the large peony to the right with its warm reddish background.

Now it's time to let this layer dry and assess where to go next.


Posted by Kaaren at 4:41 PM No comments:
Email ThisBlogThis!Share to TwitterShare to FacebookShare to Pinterest

A Different Kind of Collage 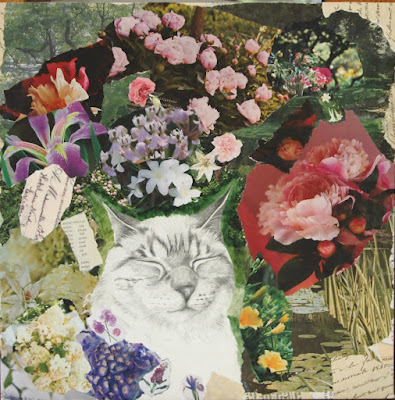 Until now, my collages have had nearly exclusively black and white (or black and off-whites of various sorts) elements and then I added all the color myself.  In this one, I took a different approach.

I have in mind a larger piece (this one is 12" x 12") with two cat drawings and lots of flowers along the theme "innocence amidst beauty."  This is in preparation for that larger one and is an experiment with technique.

This photo is actually of the second layer.  All that was on the first layer was my cat drawing, a few text pieces around the edges, and three or four large tree-filled landscape and garden scenes covering most of the background.

From there I went on to add this myriad of little shards of flowers, ranging from very tiny - like the iris and sweet peas in front of her fur - to rather large - like the peonies in the center of the right side.  A very few are carefully cut out, but most are torn, which I prefer unless I need a clean edge.

I read a piece by Seth Apter in "Cloth, Paper, Scissors" magazine about collage artists either being auditioners - placing and re-placing pieces until they were happy with the composition and then gluing them down - or committers - immediately gluing the first piece in place, then the next and the next, letting each commitment guide the next choice.

Well, in this piece I was definitely an auditioner.  I would say that working with the black and white backgrounds I've generally been a committer in the collage part, then altering everything later with paint.  But with the added element of color involved in the placement of the pieces, it seemed easier to make a mistake that I couldn't easily get out of later - so more caution seemed advisable.

Anyway, here I am at the beginning.  Now it's time for a long assessment before proceeding.

Posted by Kaaren at 2:24 PM No comments:
Email ThisBlogThis!Share to TwitterShare to FacebookShare to Pinterest 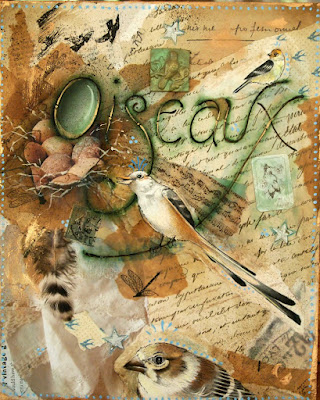 I may have a few little tweaks left, but in general, I'm finished.  Working on this has been an absolute delight.

To get to this stage, I first added a few more elements to the collage - the feather and the tiny blue playing card.

Then I began working with acrylic paint.  I painted over the white edges around the town out drawings.  For the nest with the eggs, I defined the egg shapes and added depth around them.  Then I added dark and light squiggles for the finer branches in the nest.

I painted the letters Van Dyck Brown with a script liner brush.  And then I floated Jenkins Green around the letters.  I washed a bit of Phthalo Blue over some of the green.

My final steps were to add my favorite embellishment of tiny dots, the finger edge of bronze metallic paint, and the bronze details over the brown of the lettering.  My very last touch was to add the 3D bird square at the center top.  I made several of this a few years ago from polymer clay in a mold I made from an old button.  I've used the in a few projects and they're nice to have on hand.

I'm happy with this piece - I sure hope "Cloth, Paper, Scissors" magazine likes it!

Posted by Kaaren at 5:45 PM No comments:
Email ThisBlogThis!Share to TwitterShare to FacebookShare to Pinterest

A Collage for a Challenge 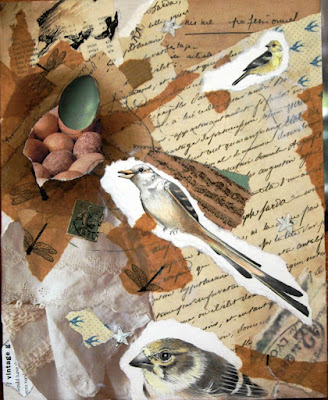 The next reader challenge from "Cloth, Paper, Scissors" Magazine is to create an 8"x10" piece of art featuring hand lettering as the focal point.  I'm finding it both fun and stimulating to enter these challenges and this one is right up my alley as I really like words!

Pretty quickly, I decided that my word would be "oiseaux' which is French for "birds."  From there, I gathered my collage materials, focusing on pieces with French words or writing, or birds.  It's always fun to go through the papers I've saved and remind myself of the things I have.  I found several photos of birds from magazines and considered using them directly.

That led me to a bit of research on copyright law and I think I may have been OK with it, but I decided to do drawings instead and use them.. I love to draw, and I think it makes for a finished piece that is more special.  So I did the drawings on Strathmore Mixed Media paper and then added a touch of transparent acrylic, working with it as though it were watercolor.

I did a couple of layers and then stopped at this point to let everything dry really well over night.  In the morning, any of the papers that had wrinkled slightly were nicely flattened out.

Posted by Kaaren at 6:17 PM No comments:
Email ThisBlogThis!Share to TwitterShare to FacebookShare to Pinterest 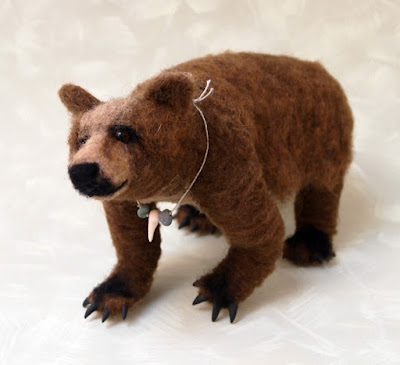 I finished the bear and am happy with him, but I wanted some touch that would make him special - not like every other bear!  After much consideration, I came up with the warrior necklace.  I made a little polymer clay "tooth" then strung it on a cord with a tiny river rock on either side.  Now I think I have a special bear!