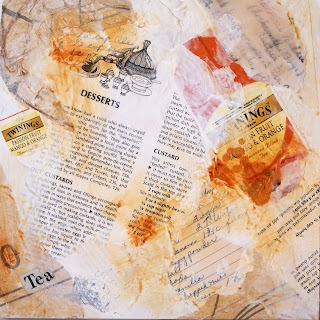 Every year our local art club, Placerville Arts
Association, has a 3D show for its members.  We hold the show in a local gallery and to ensure that we have enough art for the walls - we don't usually get much 3D art that hangs on the wall - we also include "3x3"s.  Each 3x3 is a collection of nine 8"x8" 2D pieces by one artist centering around a theme chosen by the artist.  We then hang the collections on racks 3 colums wide and 3 rows high - hence "3x3."

This year I decided to continue with the mixed media collage work that I experimented with at our art camp a few weeks ago.  Each piece will have a collage background then painting on top of that.

My theme will be related to tea, so I've collected several different teabag wrappers, teabag tags, and paper tea container labels that I'll incorporate into the backgrounds.  I also bought some vintage hand-written recipe cards on Etsy and am tearing pages from a "Joy of Cooking" cookbook that I've had since the 60s!  I found it difficult to tear up and use those old recipe cards, but not so tough to tear a page or few from the cookbook!

My original idea was to paint portraits of some of the vintage English bone chine teacups I've been collecting, perhaps incorporating birds in the designs.  So I photographed one of the cup-and-saucers, printed it, and cut it out.  When I layed it against the background, though, I found that my concept won't work.  The tea cups are too delicate and fussy to fit with this type of background.

So now I'm thinking that I'll paint birds and fruit.  So, for example, on this one which uses paper from Twining's Passion Fruit, Mango, and Orange, I'd probably paint one of those fruits with a bird standing on top of it.  I'm thinking I'll keep the birds somewhat fanciful.

But, as I say, I'm going to complete all the backgrounds first and, as far as the painting is concerned, continue to wait for the perfect idea to strike.  It could be a long wait!﻿
Posted by Kaaren at 3:45 PM No comments:
Email ThisBlogThis!Share to TwitterShare to FacebookShare to Pinterest

Learning from the ACEOs 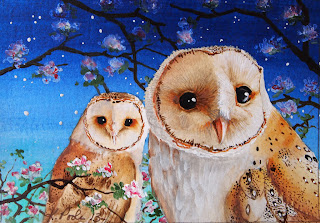 Here are a few more of the ACEOs I've done recently.  I especially like the barn owls.  I'm finding it valuable to put myself on a painting schedule, and with each little painting I complete I feel more comfortable and accomplished.

They're selling on eBay fairly well and I was able to donate nearly $500 to animal charities for February and March.  It's a lot of work, and also a lot of work for the money. Each painting takes me between four and five hours, and I start the bidding at $17.50.  I've had a few that sold for around $35 and another few that sold for abount $25, but most that sell go for under $20.

Still, I'm pleased.  I know that it's difficult for people to part with their money, especially for a luxury, non-utilitarian item like these little paintings.  And I'm grateful and flattered any time someone decides to do so. 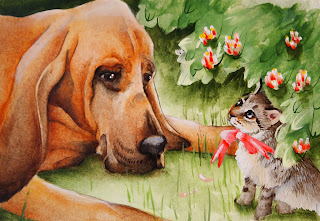 Posted by Kaaren at 5:42 PM No comments:
Email ThisBlogThis!Share to TwitterShare to FacebookShare to Pinterest

A Beaver Family for Me! 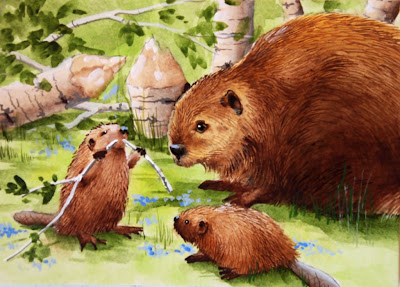 This is one of the ACEO's that I painted and posted for sale on eBay.  It's called "Beavers in Training."  One of the reasons I haven't previously worked too hard at selling my work is that I have a hard time parting with it.  And of the ACEO's I've done, I think this is my favorite so far.  I posted it nonetheless.  But, oh Joy! No one bid on it!  I think I've given the world fair chance, and now I'm keeping this one for myself!  It's acrylic, by the way - on Strathmore mixed media paper which I like very much and highly recommend.
Posted by Kaaren at 5:39 PM 1 comment:
Email ThisBlogThis!Share to TwitterShare to FacebookShare to Pinterest 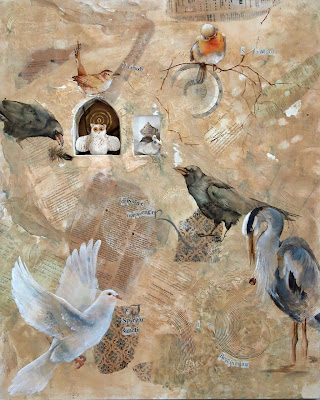 Last weekend I painted with about 20 other local artists.  We rented an art studio classroom at the local college and spent three days just immersing ourselves in our projects and enjoying each others' company.  I wanted to try a new technique and this is the piece I did.  It's not quite finished but it's almost there.  Despite the fact that it was an experiment and a new venture I was pretty happy with the way it's turning out and very happy with the technique.
Here's how I did it.
I began with a piece of 1/4" thick hardboard that I cradled with strips of poplar so that there is about 1 1/2" of clearance on the back.  Then I cut the two holes for the recesses.  I constructed the boxes for the holes from heavy paper and stuck them in place with adhesive.
For my first layer, I coated the whole piece with gesso and stuck pieces of paper on randomly.  I brushed a little gesso over the edges of the paper both to help stick them and to soften the edges.  I had read somewhere that it's a good idea to tear the edges of the paper so that they transition more easily, and I did that.  After the gesso dried I applied a coat of matt gel medium and let that dry too.
Then it was time to get messy!  I put patches of stucco, extra heavy gesso, and hard molding paste here and there.  In the lower right corned I swirled the hard molding paste with a comb to make the design.  In other places I just created texture with my fingers.  I let that mostly dry then proceeded to the next step, which was......
Rolling over the surface with thinned acrylic paint.  As it rolled it created texture on the highs and lows of the surface.  I used a couple of different colors.  When I was done I thought it was too dark so I started wiping it back with wet paper towels when the HAPPY ACCIDENT happened.  It turned out that the areas of extra thick gesso weren't completely dry and in some of those areas I actually ended up wiping back to the original coat of white gesso.  Turns out I like those white patches very much!
After another coat of matt gel medium I was ready to paint.
I drew the birds on separate pieces of paper and cut them out.  After arranging them the way I wanted them I drew outlines around the cut-outs, removed the cut-outs, then drew in the details.  After that it was just acrylic painting as usual.  I paint thin and the result was quite a bit of the background texture showing through - more so when the paint itself was more transparent as in the white dove.  So in some areas I painted several layers.
While I was waiting for earlier layers to dry I molded the two little birds in the alcoves from paper clay.  At the point that I modeled the birds I was envisioning a piece more fanciful that the one I ended up with, so the style of the sculpted birds doesn't quite fit with the style of the painting.  They're not glued in yet and I'm not sure whether or not I'll use them.  That decision is one of the steps to finishing this piece.  The other is deciding on some other finishing touches.
If I had it to do over again, once I placed the bird cut-outs I would have stopped and assessed the background.  Also I think I might have scribbled some color on those bird cut-outs so I'd get a better sense of the final value placements.  With that information I might have darkened parts of the background or added more color to some areas.  I see things now that I would like to have done that I think would have made the piece better but it's too late.﻿

I'm really glad I tried this piece and plan to do more with the same method.
Posted by Kaaren at 5:33 PM No comments:
Email ThisBlogThis!Share to TwitterShare to FacebookShare to Pinterest 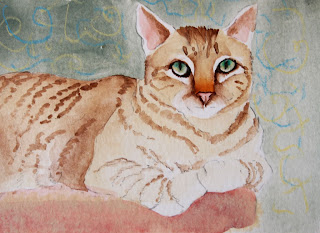 Each quarter I'm planning to send a little "thank you" to the people who have bought my ACEOs - a print of one that I won't be selling the original of.

Since I'm donating the proceeds of my sales to two animals charities - Idaho Black Bear Rehab and Fat Kitty City, the subjects of these "thank you" ACEOs will be animals from those shelters.  Here's the first one, my little cat Zekie who came to me, along with his brother Starbuck, from Fat Kitty City. 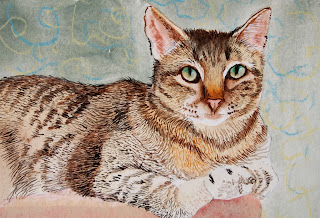 I thought you might like to see the three main stages of the painting once the drawing is done.

The first photo shows the main under-colors blocked in.  I always start with the eyes and tend to take them farther than the other parts of the animal on this first pass.  I also begin the background.  Since this background is simple, I went ahead and pretty much finished it, getting it to the value I want.  By the way, I'm using Caran d'Ache Neocolor I crayons for the squigglies.  They resist the thinned acrylic that I painted over them.

The second photo shows the majority of the fur detail done.  Oddly enough, I rather enjoy the tedium of painting all those little lines.  And, yes, I do them with a liner brush and not a pen - a '00' script liner.  I prefer the liner to the pen because I can get nice pointed ends on the brush strokes whereas the pen strokes have blunt ends. 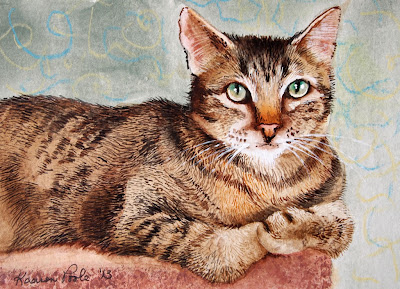