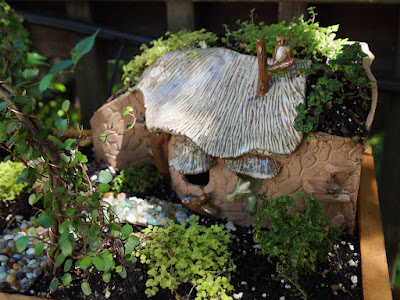 I just couldn't resist making another fairy garden.  The "house" I made from stoneware is meant to be Grendel's Lair.  You can perhaps see Grendel's girlfriend peering out of the window.  Most depictions I've seen of Grendel show him as a troll.  Trolls, however, don't appeal to me, so I made Grendel - and her girlfriend - dragons. 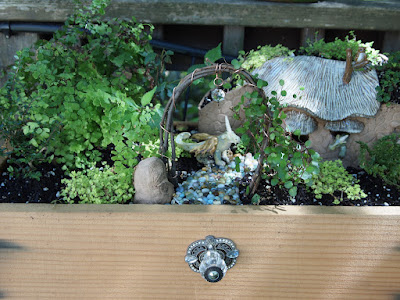 The lair is both a house for Grendel and a pot for plants.  As you can see, I planted baby tears and miniature ivy over the roof.  As they grow, they should cover all the bare dirt and grown down a bit over the roof of the lair.

The garden is planted in a shallow box I made from cedar fence boards.  And I attached the fancy knob just to add a bit more fantasy.  I made the arch from green twigs, twisting copper wire around them to hold them in place while they dry.  I've hung a vintage chandelier crystal from the top of the arch.

You can see Grendel standing on the path.  Here's how I made the path.  I cut the shape from plastic from one of those packages that cake comes in at the grocery store bakery department.  I coated it with a thick (a bit less than 1/8") layer of acrylic gel medium, then sprinkled the little colored glass stones over the medium and pressed them in lightly.  I got these sweet little stones at MiniatureGardenShoppe.com.  I also got several of the plants from that web site. 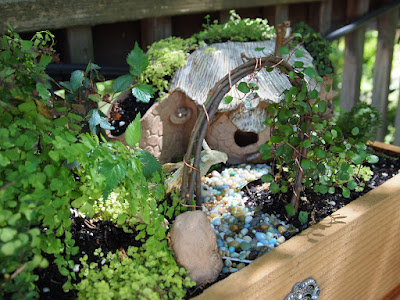 For a newly planted fairy garden, I think it looks pretty good.  Oh, by the way, the "rock" you see at the base of the left part of the arch is actually hollow stoneware.  I incised runes into it that are a transliteration of "Grendel's Lair."

Posted by Kaaren at 3:38 PM No comments:
Email ThisBlogThis!Share to TwitterShare to FacebookShare to Pinterest 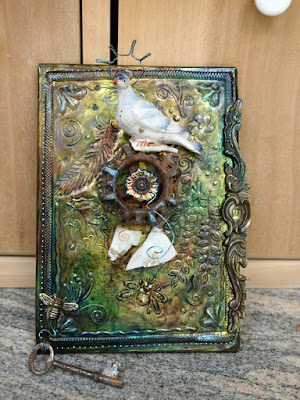 A few weeks ago I went to the "Art is You" retreat in Santa Rosa, California, and took Michael DeMeng's workshop on metal embossing.  The workshop kit included the sheet of metal, a wood backing board, and a small set of embossing tools.  We also had access to many of his tools and paints.  We were asked to bring some found objects for our pieces.

Michael gave us instruction on the embossing and on applying the embossed metal to the wooden panel.  But we were on our own for design - both the embossed design and the overall design of our pieces.  This is the way I like it.  I value pieces from this type of workshop much more than the pieces where everyone in the class creates the same piece.

Michael was a very good teacher and I'd definitely take another of his workshops.

Ironically, the only found object I used from the collection that I brought with me was the metal bee bead (from Burt's Bees packaging, if I remember correctly) at the lower left.  The key, porcelain bird, and rusting faucet handle were elements I bought there in one of the shops in the trade show area.

I thoroughly enjoyed this class and am very glad I went! 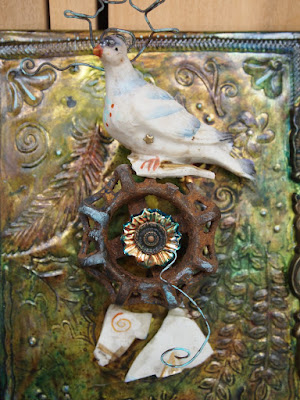 Posted by Kaaren at 5:18 PM No comments:
Email ThisBlogThis!Share to TwitterShare to FacebookShare to Pinterest 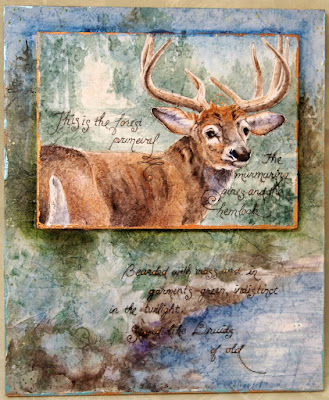 I finished my painting by deepening the colors, especially on the stag, and adding the lettering which is the first few lines of Longfellow's "Evangeline."  The final touch was additions of metallic paints - bronze and turquoise - around the edges and dots of bronze on some of the letters.  For the edges, I dipped the tip of my finger in the paint then rain it along the edge.  I like this method because it gives a nice, uneven edge which, I think, goes with the uneven texture of the masa rice paper. 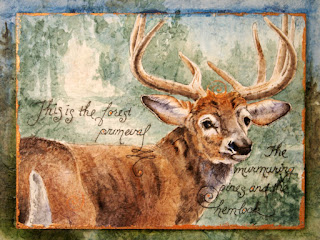 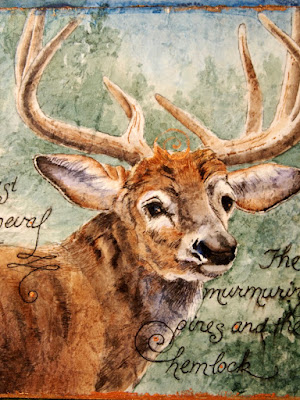 Posted by Kaaren at 4:44 PM No comments:
Email ThisBlogThis!Share to TwitterShare to FacebookShare to Pinterest

More on "This is the forest primeval" 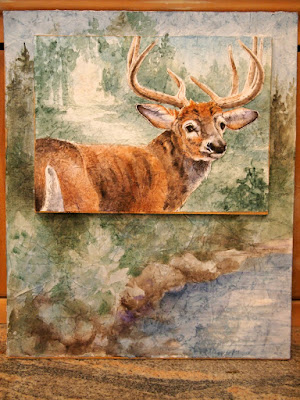 I've done more work on the deer and a bit more on the background.  I'm not too happy with the very bottom.  The line of the rocks is too regular.  And there's really nothing I can do about it at this point.  I've never had much success "lifting" watercolor, and it's close to impossible on this paper.  So I guess the lesson is to do more planning ahead of time - isn't that always the case?

But I like the deer and the forest behind and around him.

Posted by Kaaren at 3:32 PM No comments:
Email ThisBlogThis!Share to TwitterShare to FacebookShare to Pinterest 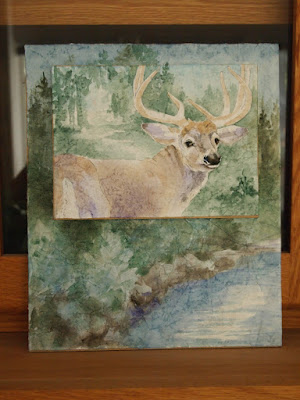 The first lines of Longfellow's poem "Evangeline" have stuck hauntingly in my mind since high school - a very long time now!  So I decided to do a painting inspired by them - one that would include my script of those lines.
I settled on another watercolor on masa paper for this project, partly because I enjoy the medium and partly because I can always use more practice with this tricky medium which, for me, usually morphs into mixed media before too long!
The board is actually two boards, one glued on top of the other.  The back board is 10" x 12" and the top board with the deer is 6" x 8".  Both have dampened, crumpled masa paper glued to them with a 1:1 water and PVA glue mixture.
Here's the first pass.  The background behind the deer is inspired from a photo I took when I was in England last year.  I was walking along a path with the woods on either side and the way the light fell was captivating - I'm so glad now that I snapped it!
I drew the deer first and transferred it by tracing my drawing, re-tracing the lines on the back side of the tracing paper with #2 graphite, then placing the tracing paper over my prepared masa paper/board and going over the lines AGAIN with a stylus.  This is a tedious process, but I find it worthwhile for subjects where the drawing really matters.
The rest of the painting, though, I didn't draw first.  I had an idea of the scene I wanted to create, so I just went for it.  Plus, some of it will be covered, eventually, with script.﻿

Posted by Kaaren at 7:28 PM No comments:
Email ThisBlogThis!Share to TwitterShare to FacebookShare to Pinterest 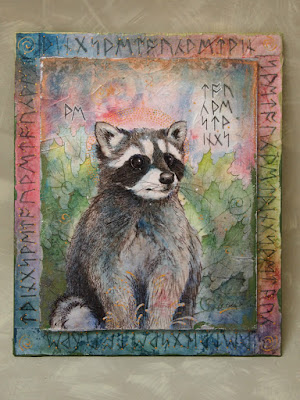 Here's the newest watercolor that I've done on masa paper on board.  Actually, it's mixed media, because after I finished the watercolor I did some ink work on the raccoon and then added some metallic acrylic accents.  The important lesson I learned from this piece is to do any gold work OVER, not under, the varnish.  The varnish really dulled it!

The inscription is a transliteration into runes of the phrase "he touches things." The word "raccoon" derives from an Algonquin word, :arahkun," meaning "scratches with his hands." 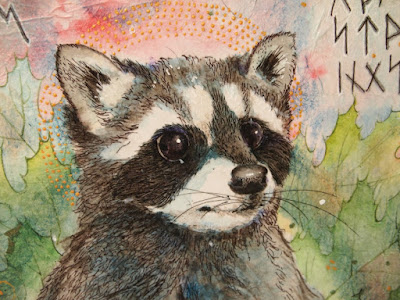