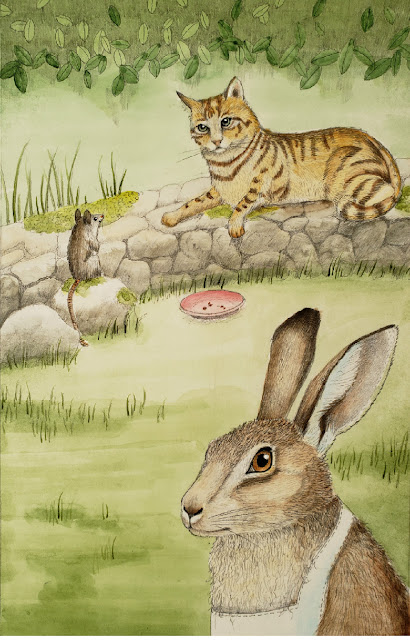 As a visual artist as well as an author, I have a very difficult time writing a blog post without including at least one image. So here's one of the 34 illustrations I did for my book Tales of Love and Courage from Milkweed Manor. And it actually ties in to what I'm going to write about today, which is a conundrum in writing fantasy.

You can clearly tell I write fantasy by the apron on the hare as well as the cat and rat having a calm conversation.

Last year my sister bought me a wonderful book, Writing for Animals, an anthology of essays about writing in the voice or, and to advance the cause of animals. One of the essays (so sorry I can't remember which one it was and therefore the author) advised for writers of fantasy to add as many realistic details as possible so as to avoid stretching the reader's credulity too far.

I've been writing the sequel to my Milkweed book, Dark Days at Milkweed Manor, and last night I was working on the opening scenes of one of the stories. A hare and two rats are sitting on the fringe of a work site where large machines are scraping, digging, and gouging the earth. Tragically, the ground they're destroying was the home of these three animals as well as many others who have been killed or displaced.

When I woke up this morning, one of the first thoughts that came to mind was realizing hares don't live in burrows - they live in grass nests! So, surely, living in grass nests, the hares would have had plenty of time to escape. Oh, no! What to do?

If I left my writing as is, then I'd be in error about the way hares live. Even if most readers wouldn't catch the error, some would and I would always know it was there. On the other hand, if I write about the hares living in above-ground grass nests, the story as I've written it won't make sense.

After some cogitation I decided to be as unspecific as I can while still leaving an impressions that the hares were in a position to be caught unawares. This may seem to be a small problem, but I'm glad I caught it!

Posted by Kaaren at 5:33 PM No comments:
Email ThisBlogThis!Share to TwitterShare to FacebookShare to Pinterest

What Makes it All Worthwhile

Back in 2008 I put blood, sweat, and tears (figuratively, of course) into my third art instruction book, Drawing Birds with Colored Pencils. But it was really worth it. Not just because it did quite well on Amazon and, 12 years later, still is! But mostly because writing, illustrating, and finishing it was such a feeling of accomplishment.

And on the way, I learned quite a bit about birds. One of the things that amazes me most about them is how much they can express with body language even though:
they have rigid beaks so can't smile
they can't control individual wing or tail feathers so they can't use their 'arms' expressively
and their spines are fused from shoulder to hip, so no striking asymmetric poses!

But what I really want to tell you is an amazing thing that happened today. Let me preface by saying that although I have an Instagram account I haven't used it in close to a year. Today I was waiting in the truck for my sister to emerge from the grocery store and for lack of anything better to do, checked out Instagram. And there was an amazing post from a junior high school art teacher. She posted photos of the work of four of her students and explained they had been drawing birds from my book! Made me so happy!

I wish I could include the photos here, but I can't copy them off Facebook or Instagram. However, here is a photo I found on Google of someone's work with my book underneath. Sorry but I don't know the name of this artist. 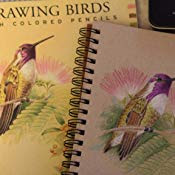 And here are two of my drawing from the book. If you're interested, you can find the book on Amazon by clicking on the link to the right - the book cover illustration with the rat, hare, and crow. 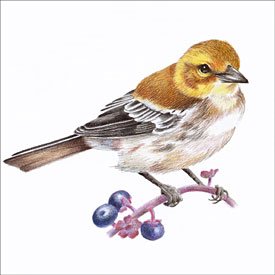 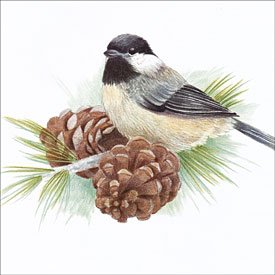 Posted by Kaaren at 5:42 PM No comments:
Email ThisBlogThis!Share to TwitterShare to FacebookShare to Pinterest 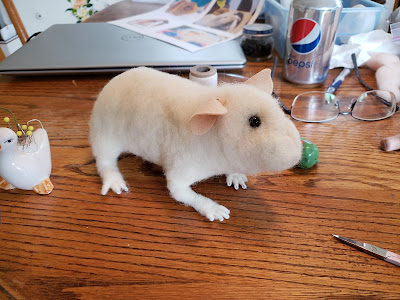 The last time I worked on this little guinea pig I had spent quite a bit of time building the form with core wool. So when I picked her up again I didn't have a whole lot more to do before I could start with the final colors. 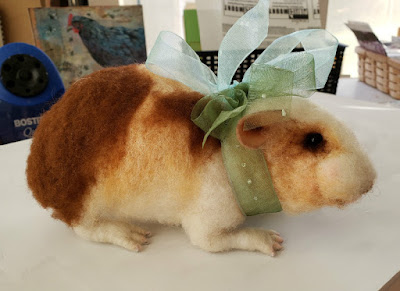 Here's the finished product. Adding the colored wool increased the body size somewhat. I spent most of my time, though, on the head and face. The ears are wool felt. I cut the shapes then tacked them to the head with a large needle and thick (like carpet thread) thread. The final coat of wool also helps hold them in place. 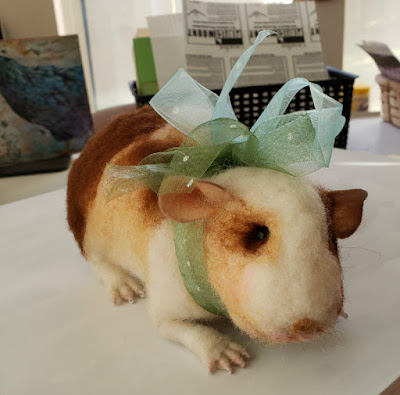 I used chalk cakes and a small brush to add a bit of blush to her cheeks and a dark brown edge to her ears.

It's hard for me to resist adding something more, so I found two lengths of pretty organza ribbon and gave her a nice bow. For the final tough, I dabbed dots of glitter glue here and there on the ribbon.

This little one doesn't have a name yet. That will be up to my sister when I give this to her for her birthday!