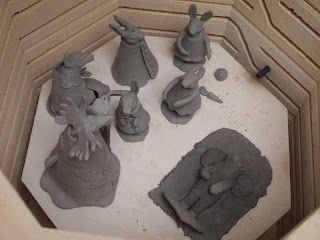 Here's my current group of sculptures drying in the kiln and waiting to be bisque fired.  I need several pieces for it to make financial sense to run the kiln and, to tell the truth, I could fit a second layer, but I'm OK with going with it at this point.

With this batch I've started a new regimen of letting the pieces dry in the kiln.  I've found that when I let them dry outside the kiln and then transfer them they're prone to breakage as a dry piece is so much more fragile than a wet one.  So I'm hoping this will work well for me.
Posted by Kaaren at 7:41 PM No comments:
Email ThisBlogThis!Share to TwitterShare to FacebookShare to Pinterest

Back to Clay for a While 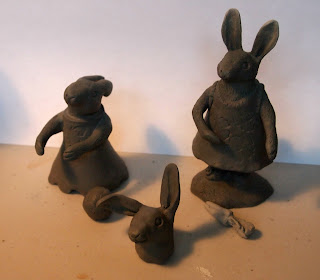 One of the wonderful things about working in a variety of media is working a while in one then, when it seems like a good time for a change, moving to another.

So, I've begun making a group of small clay figures.  These are the O'Hare sisters in various stages of sculpting.  I took this photo to illustrate the process.

I always begin with the head.  In this case, I made all three heads before I proceeded because I wanted to be sure they were the same size.  The next step is to add the dress which is basically a cone (as in the finished rabbit on the right) or a stack of two cones, like the partially sculpted rabbit on the left).

Next I close off the bottom of the dress by putting a slab of clay inside, about 1/2" up from the hem of the skirt.  At this point I have a hollow form, so I need to be sure to remember to poke a hole in the bottom.  Then I add the arms.  At this point, I like to let the piece rest overnight under plastic.  The slip I use to join pieces is quite a bit moister than the clay, so letting the piece rest allows the moisture to even out and strengthen the joins.

Next I attach the legs to the slab on the bottom of the dress being sure not to cover up the vent hole.  I used to have my pieces balance on their two legs (or on the two legs and the tail for long-tailed animals like foxes, but I've concluded that it's better to have a base.  The base simply makes the piece more stable, and I sure don't want to sell someone a piece that's easy to tip over and possibly break.  I stamp my name in the bottom of the base, and the sculpting's done.

Posted by Kaaren at 7:24 PM No comments:
Email ThisBlogThis!Share to TwitterShare to FacebookShare to Pinterest

Zeke - The Rest of the Story 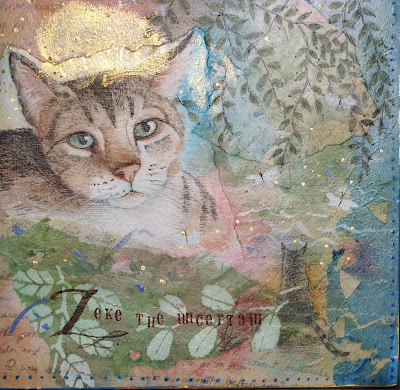 The noteworthy technical thing is the use of graphite.  In the past I've had trouble getting graphite to stick.  Even when I sprayed with workable fixatif the graphic didn't work.  On this one, I used only Liquitex matte gel medium as an adhesive and Liquitex gesso for knocking back color.  Otherwise I used Golden fluid acrylics.  The graphic worked fine over this substrate.

When I was done (except for the gold) I varnished with a satin varnish and the graphite didn't smudge.  For once, I remembered that if I wanted to varnish I had to do it before I added the gold.  Varnish over gold just dulls it! 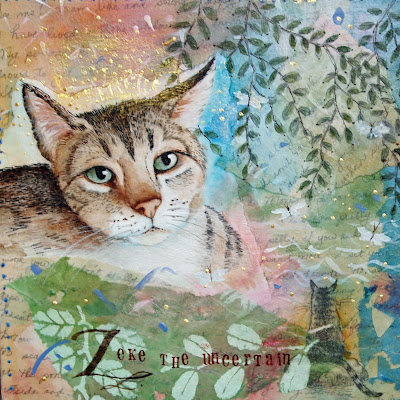 Posted by Kaaren at 7:29 PM No comments:
Email ThisBlogThis!Share to TwitterShare to FacebookShare to Pinterest 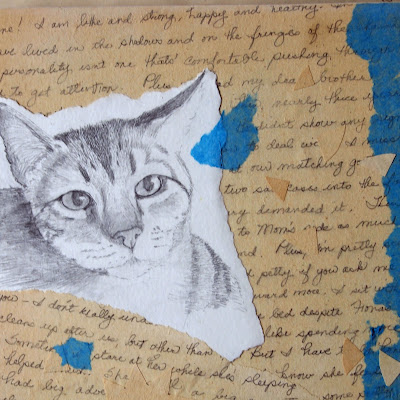 I began working on the second week's piece for the Series 52 group, a Facebook Group began by Jeanne Oliver challenging other artists to join her in creating 52 pieces during 2018, preferably working in series.  Fiona was the first in this series of mine which I think will end up with 7 pieces.

This is little Zeke's portrait - a collage featuring my drawing of him as well as my effort of writing text purportedly from him about how he would like to be seen and understood.  The name I've given to this series is "See Me!"

So, after writing the text and drawing the portrait, I placed the basic elements of the collage.  By the way, although most of the text is obliterated in the finished piece, I transcribed it before I began and will print it out and put it in an envelope on the back of the piece.  My surface is a cradled board, 8" x 8". 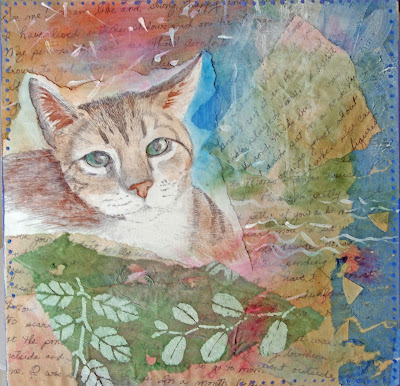 Next I added more collage elements layered with washes of Golden fluid acrylics.  I almost always stick to the more transparent colors, by the way.  I also began to add some color to Zeke - also acrylic washes.  So far, so good.  And I really like the blue tissue paper that I added along the right edge.
Posted by Kaaren at 7:56 PM No comments:
Email ThisBlogThis!Share to TwitterShare to FacebookShare to Pinterest

A Few Thoughts on Ceramics 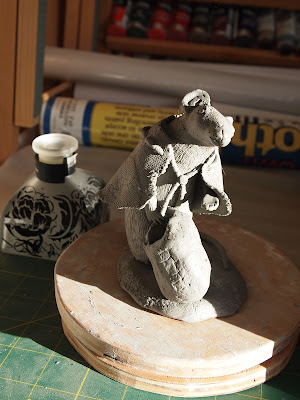 I'm doing some ceramic sculptures this week.  This is my second one which is a "poor beggar rat."  Just wanted to share a few thoughts/hints.

It's often a good idea, as one is sculpting, to think ahead to the glazing process.  Some sculpting choices will result in difficulties glazing and when there's an equally pleasing alternative, it might be wise to take it.  In this case, the bag in which he's collecting his alms will be difficult to glaze around.  So, I didn't attach it to the base or the rat's hand.  It's sitting loose in place.  I'll bisque fire it like this then I'll be able to remove the bag and glaze the two pieces separately.  In the end, I can use a glue like E6000, which is really good for gluing glass, to secure the bag in place.

The second hint is to include a base.  I began this piece without one.  In fact, I have seldom used bases but I plan to use more of them in the future.  An animal like this can be difficult to balance on the two hind feet.  And a lack of a base makes the tail vulnerable.

The third suggestion is to leave the finished sculpture covered with plastic for a day or two.  This allows the moisture, which will differ in various parts of the piece, to even out somewhat.

The fourth suggestion is to place the sculpture in the open kiln to dry.  This sculpture has some areas that will be very fragile when dry but before bisque firing.  Not having to move it when it's dry will help prevent breakage.

By the way, as I look at the rat I see that I need to dome the top of his head a bit more - another reason to leave the "finished" piece in plastic for a day or two - gives you a change to make corrections that you didn't see at first.

Posted by Kaaren at 7:28 PM No comments:
Email ThisBlogThis!Share to TwitterShare to FacebookShare to Pinterest

Fiona the Good - path to completion 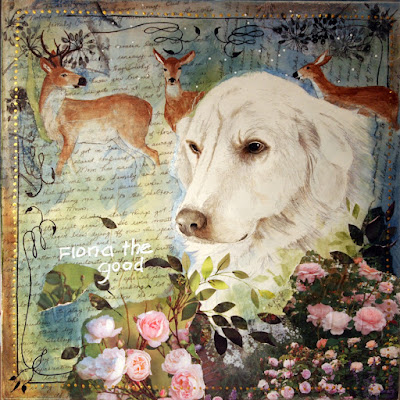 Here's the Fiona collage portrait that I just finished.  A few of the stops along the way are in the photos below.

The colored florals are from and old David Austin rose catalog.  The weedy looking things in the upper left corner are part of a paper napkin.  By the way, it took me using napkins several times before I realized that they are multiple plies of thing tissue.  You have to peel them apart and only use the top layer or you'll have a lot of trouble with the gluing.

The colors in the background are washes of Golden fluid acrylics.

For the deer in the background, I drew them on small pieces of tracing paper then transferred the outlines to the piece.  I filled them in with white gesso, but used a few thin coats - I wanted for a hint of the background text to show through giving them an ethereal look.  Finally, I painted over the gesso with washes of the fluid acrylics.

I did the line work around the edge with a liner brush and black fluid acrylics. To set off the edge outside the line work and also to help integrate the colors of the deer, I washed a bit of Light Burnt Umber over parts of the edges.

I felt I needed another bit of florals from the catalog, so I added it.  The sprays of leaves are cut from green areas of photos in the catalog, and the stems I painted with a liner brush.

The finishing touches are the white lettering and the white dots, as well as the row of gold dots around the edges.  (Can't resist a bit of gold!) 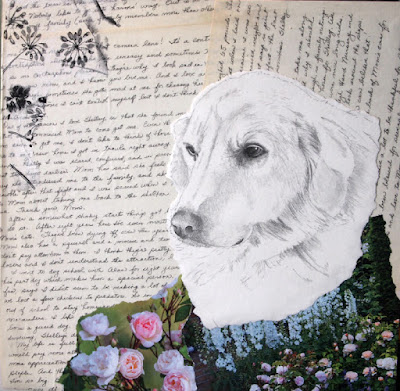 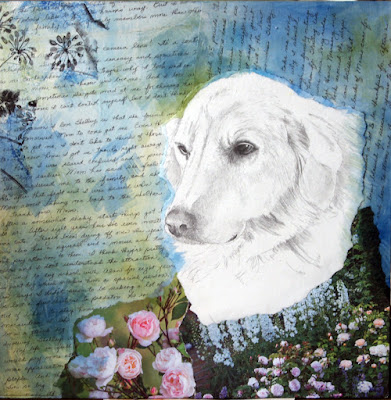 Posted by Kaaren at 5:50 PM No comments:
Email ThisBlogThis!Share to TwitterShare to FacebookShare to Pinterest 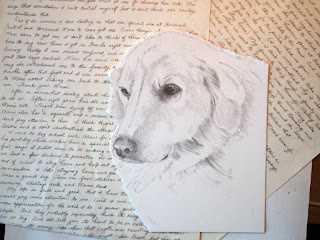 I joined a Facebook group started by Jeanne Oliver called Series 52.  Jeanne is looking for artists to join her in a year-long effort to created a body of work by painting in series - 52 in one year.  It didn't take long to decide to join the challenge.!!

I spent a few days thinking about what I wanted my series to be.  I had several ideas, but I was reluctant to commit to any one idea for 52 pieces.  Then I realized that I could paint as many pieces I want in any one series, and when it's finished, just start on another series.

So now I'm beginning my first piece in my first series, "See Me."  For each of my animal family members I'm going to do a collage with the two main pieces being a drawing and the animal and hand-written text exploring that "See Me" theme from that animal's point of view.  This first piece is of my dog Fiona.  She has quite a bit to say about seeing her - nearly two pages of fairly small writing!

I will compose this piece on a 12" x 12" cradled wood panel.  It's pretty exciting!
Posted by Kaaren at 6:06 PM No comments:
Email ThisBlogThis!Share to TwitterShare to FacebookShare to Pinterest

"Heart of the Forest" Fawn 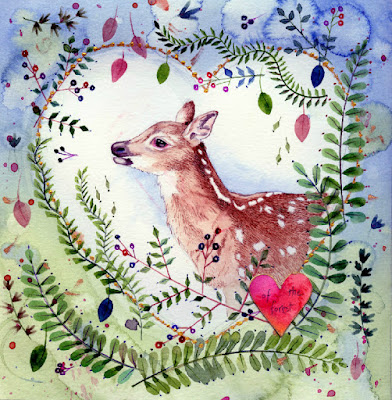 I'm continuing to work on my watercolor skills through these small decorative paintings.  I saw an article about a watercolorist whose work I liked very much and e-mailed her asking, in general, about her technique.  I'm sad to say that she didn't write me back, but by looking very carefully at her work I thought maybe she began with washes then dry-brushed the details.  Anyway, that's what I tried on the fawn.  I think it worked fairly well, so I'll continue to practice that technique and see what more I can do. 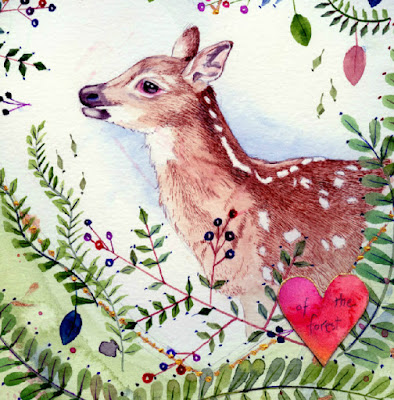 There are a few other things I'm starting to do, like put some washes of color in the background.  I know that painting the floral motifs over them will not be "clean" as the washes will show through, but I'm OK with that.  Also, I've overlapped the motifs in a few places and I'*m OK with that also.  The other thing is that I added a very light color wash to the background behind areas where the fawn is white.

The heart is cut from a piece of watercolor paper (Strathmore Mixed Media paper, actually, which is what I like to paint on with watercolor) that I slap-dashed some paint on, letting the colors run into each other.