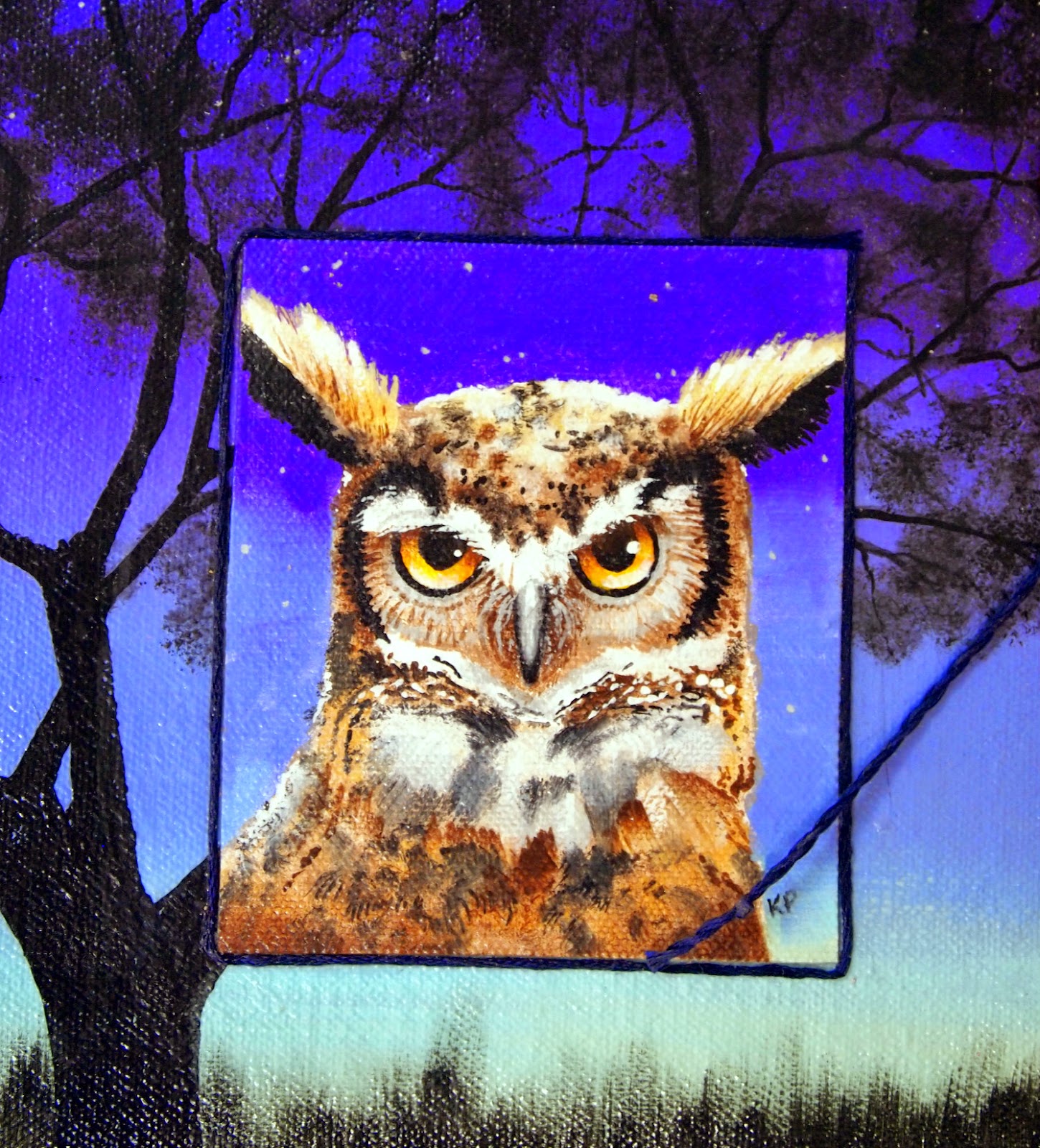 Here's my completed journal with the portrait of a great horned owl.  I don't think I'll ever tire of painting these handsome birds.  And the twilight sky is another image I find myself returning to over and over again.
There's really not much more to say about this one.  Except that I really like painting with acrylics on this heavy floor canvas.  It's a Fredrix product, and I highly recommend it.  Here's the link for it at DickBlick.com if you're interested: http://www.dickblick.com/products/fredrix-floor-cloth-canvas/﻿ 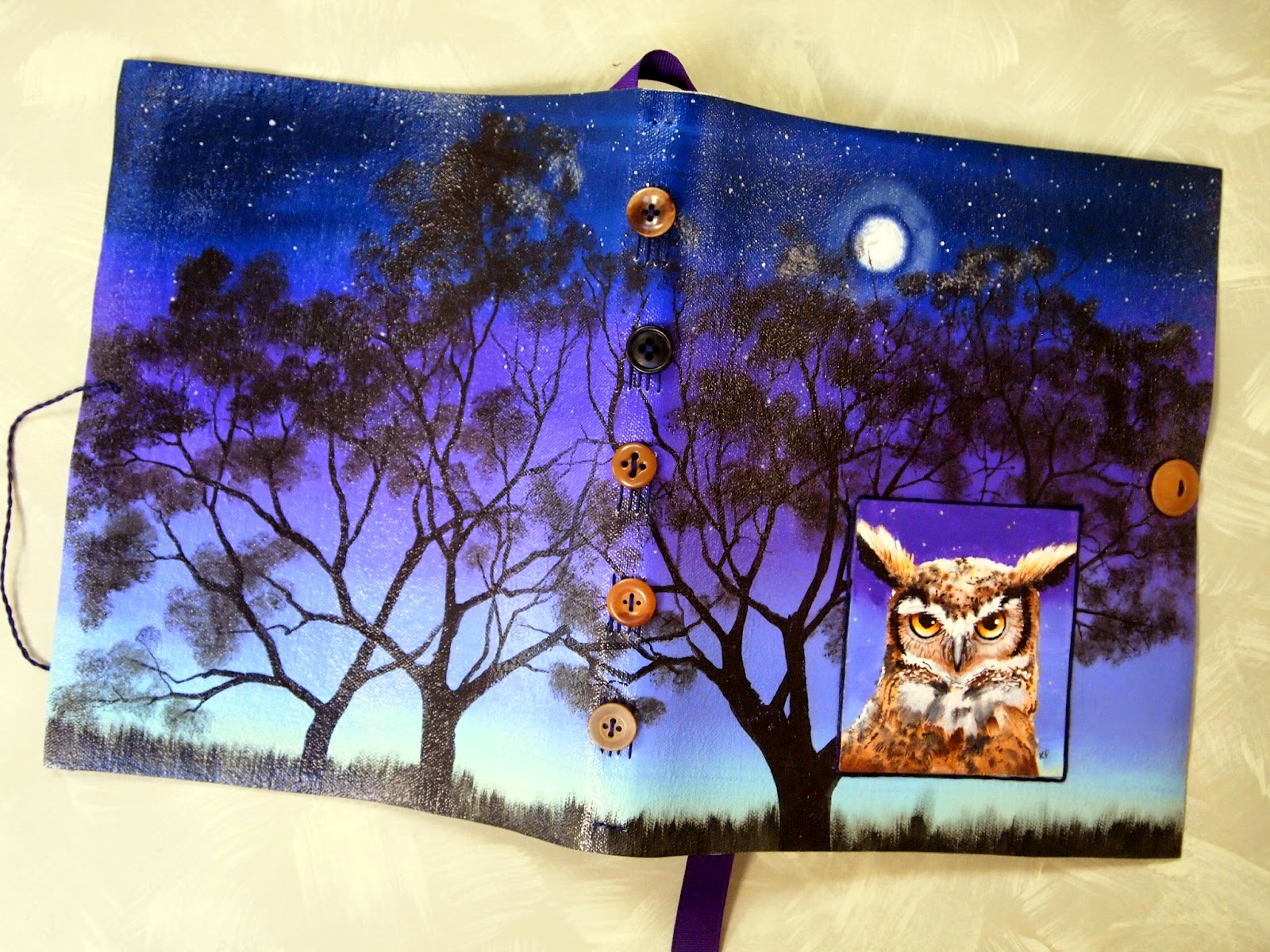 Posted by Kaaren at 4:45 PM No comments:
Email ThisBlogThis!Share to TwitterShare to FacebookShare to Pinterest

A Rabbit Journal for Spring 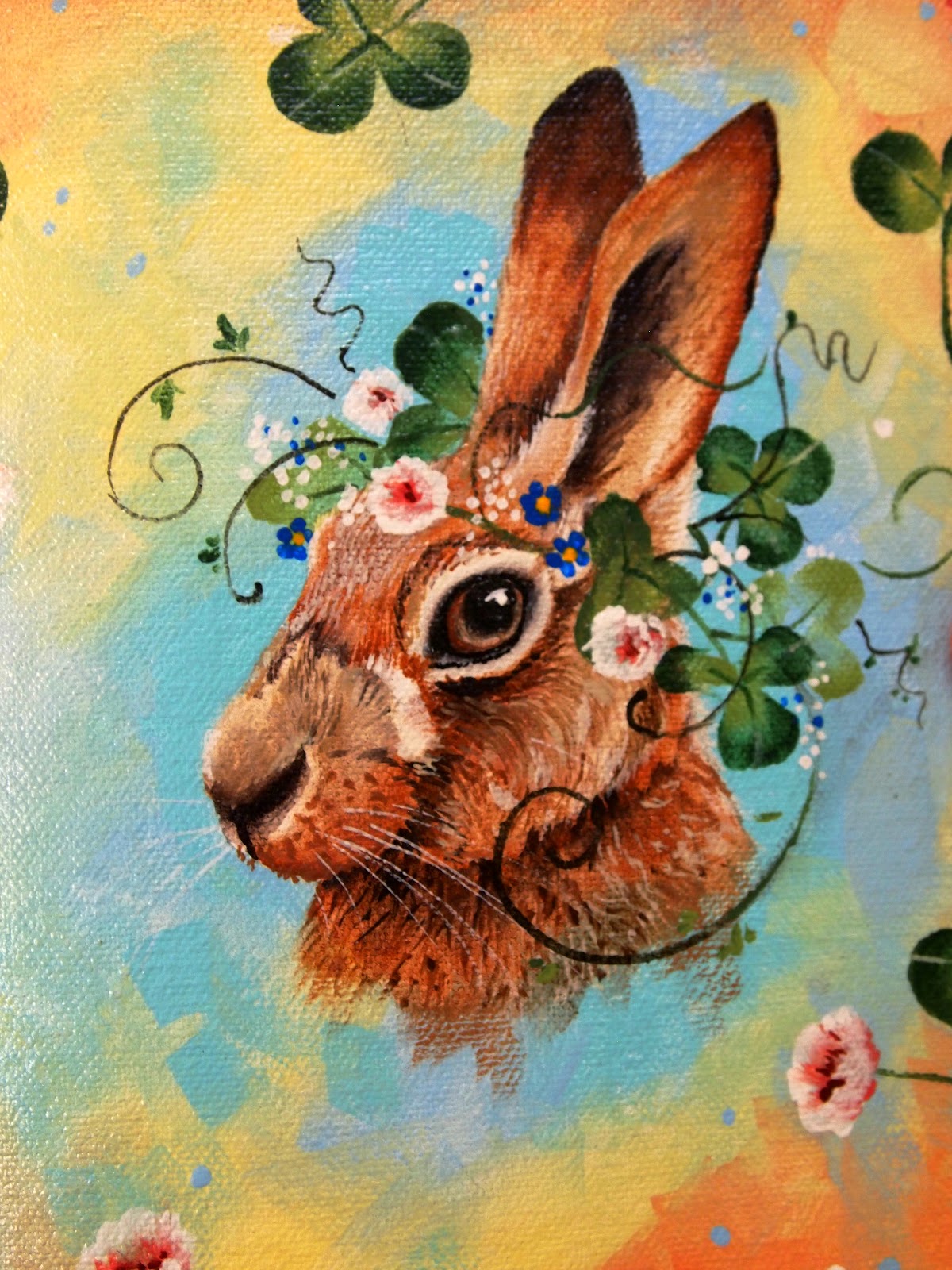 It's been so warm and dry here lately that it seems like Spring even though it's February.  I guess it's the spring-like weather that brought this design out in me!

I enjoy rabbits as a subject.  Their big eyes are captivating and their ears unmistakable.  I placed this one in a vignette and transitioned to a scumbled background dotted with clover leaves and flowers.  The clover repeats in the wreath on her head, along with the inevitable scrolls and swirls.

I think this is the only journal I've used metallic gold on.  I used it for the stroke-work scrolls around the edge.  A successful piece, all around, I think.  I was tempted to keep it for myself, but I put it in my Etsy shop.

In this piece I drew heavily on the decorative painting techniques I've used and so enjoyed in the past. 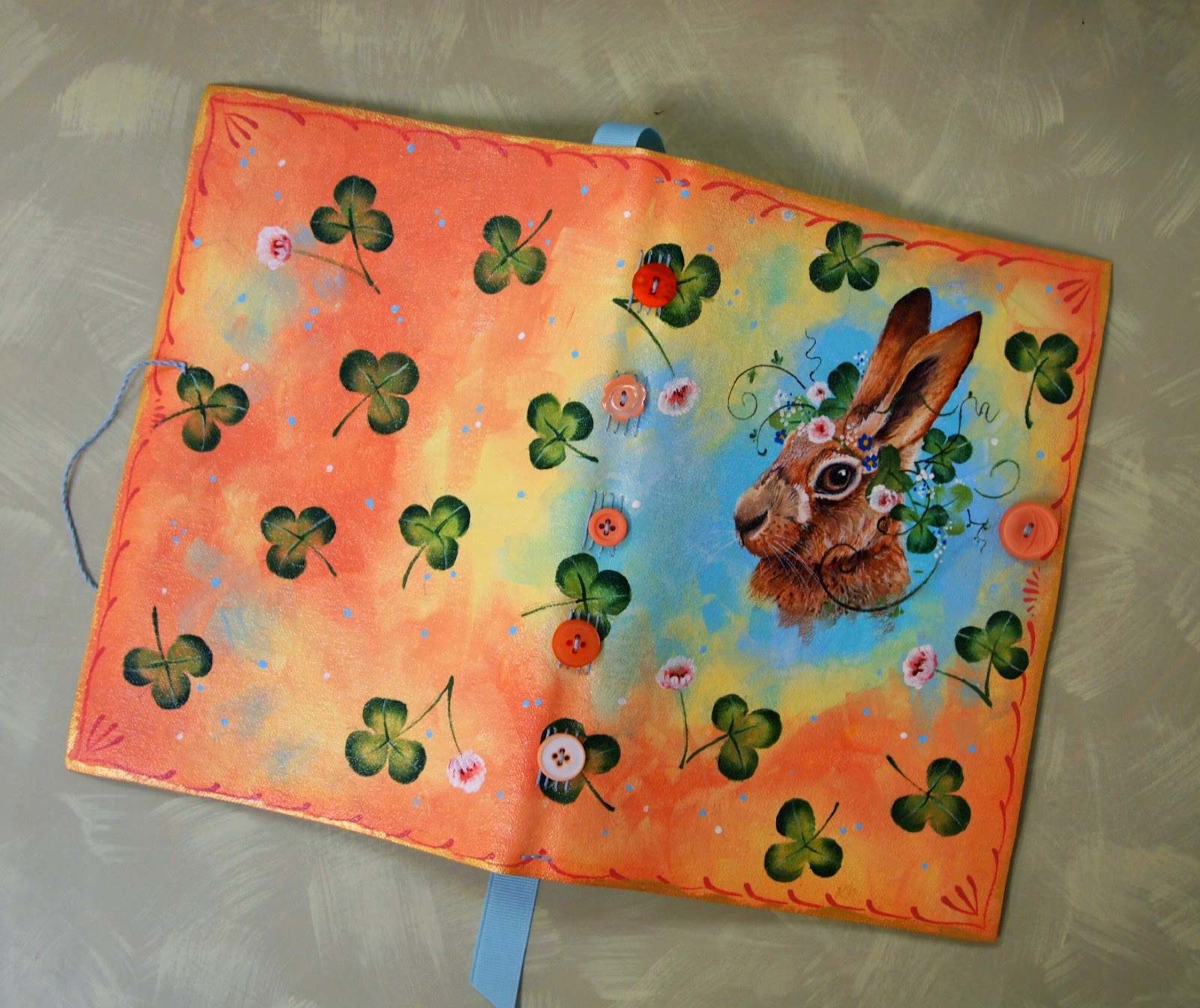 Posted by Kaaren at 4:39 PM No comments:
Email ThisBlogThis!Share to TwitterShare to FacebookShare to Pinterest 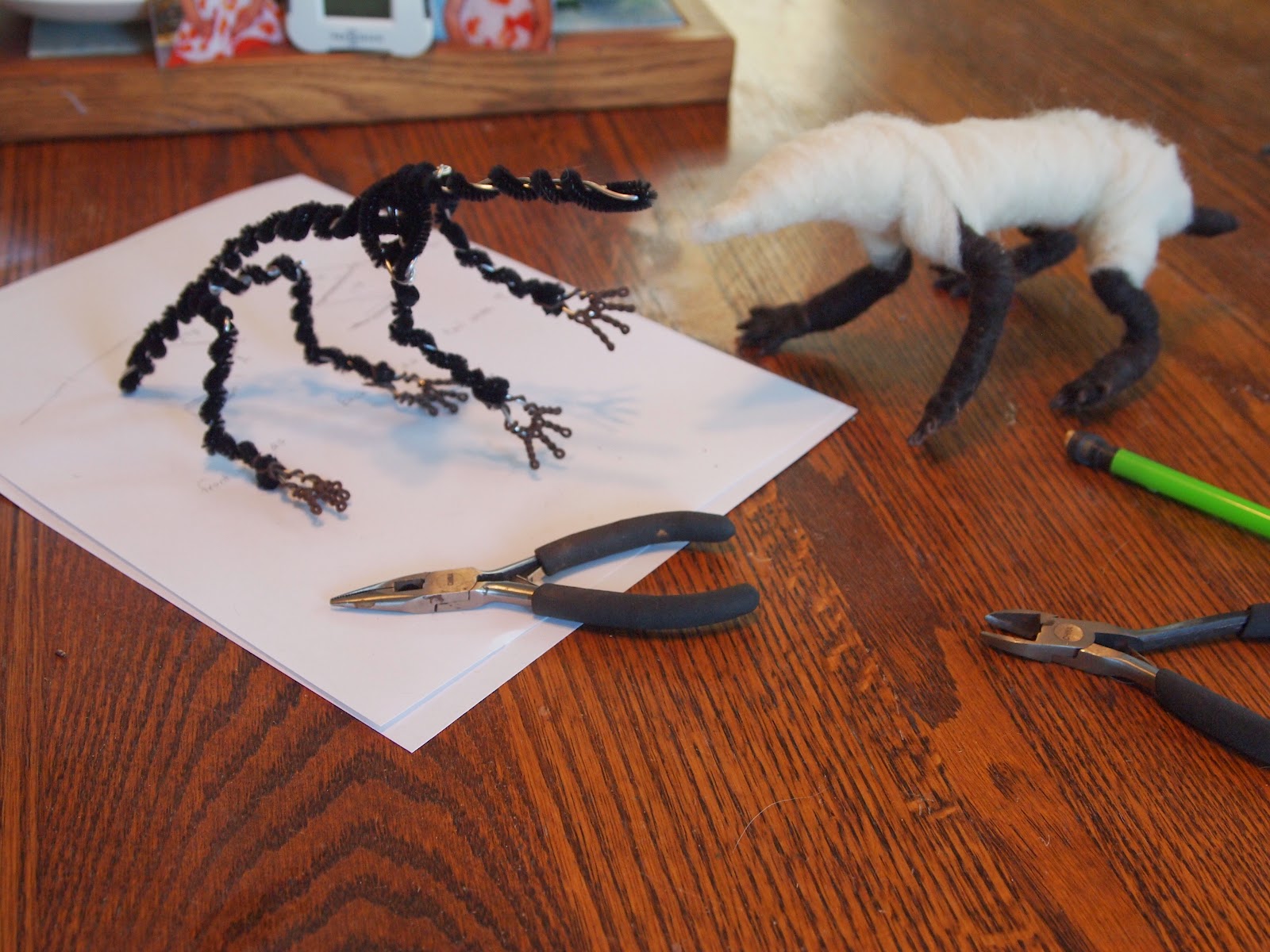 It's back to needle felting, and I've decided to try badgers.  I'm going to make both European and American badgers, but I'm starting with the European ones.
The top photo shows the beginning stages of the pair, Graham and Beryl.  On the left is the finished wire armature.  It's wrapped with pipe cleaners for the wool to grab on to.  And the toes are fashioned from 22 gauge cloth-covered florist wire.  I wrap the florist wire around a loop of the armature wire (the foot).  Every other wrap is elongated into a loop and when I'm done wrapping I twist the loops for the toes.  The wool will grab the cloth on the florist wire.
On the right is one that's a little further on.  The legs and toes are wrapped with natural black core wool while the body and head are wrapped with off-white core wool.  There's farther to go with the core wool.
﻿

The bottom photo shows the badgers further on in the process.  In the one on the left, the core wool is finished, the upper legs are wrapped with the final color, and it's ready for the pelt, and sculpting and finishing the head.  The one on the right is finished.  Cute, aren't they? 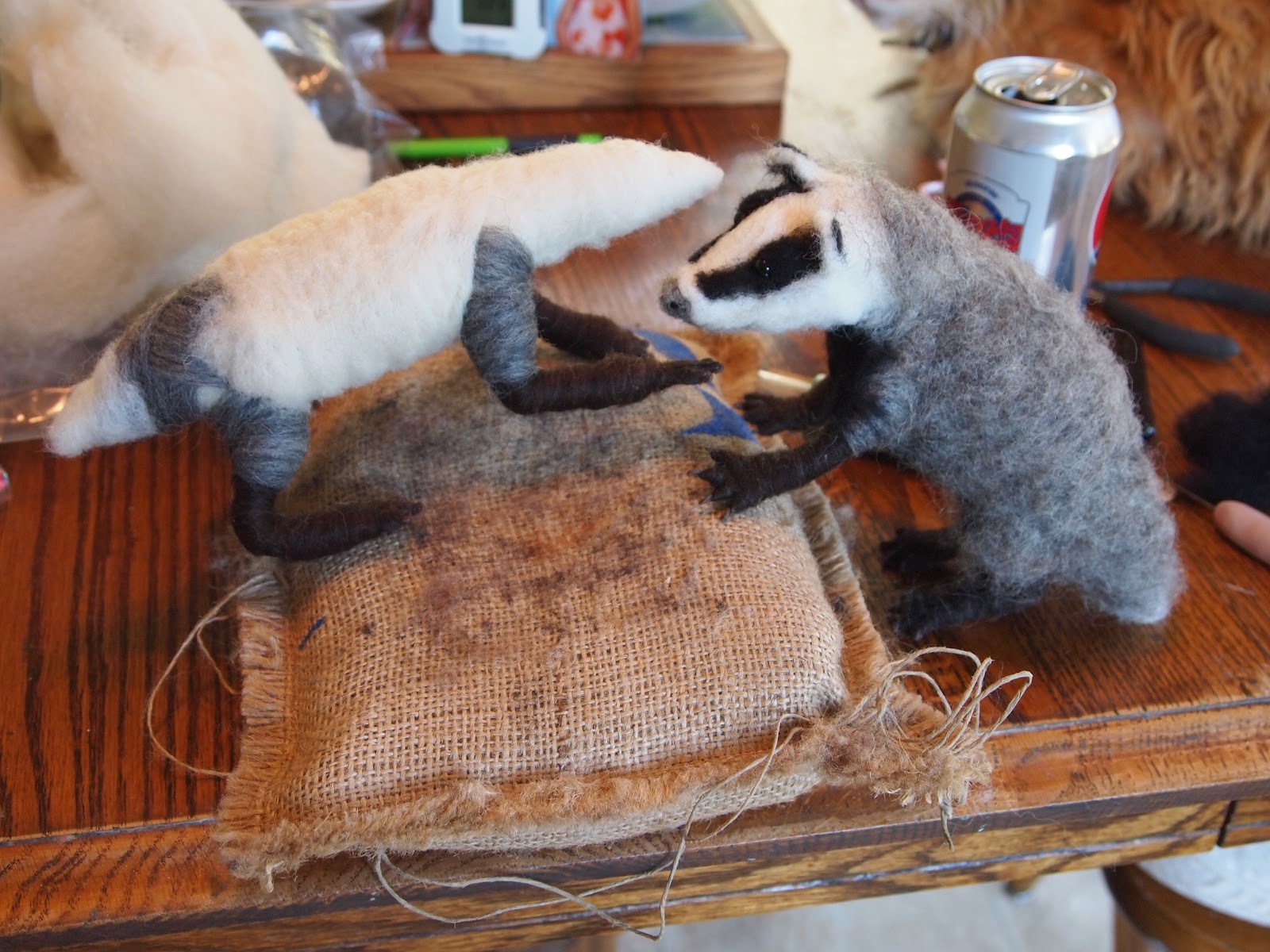 Posted by Kaaren at 7:27 PM No comments:
Email ThisBlogThis!Share to TwitterShare to FacebookShare to Pinterest

The next group of sculptures 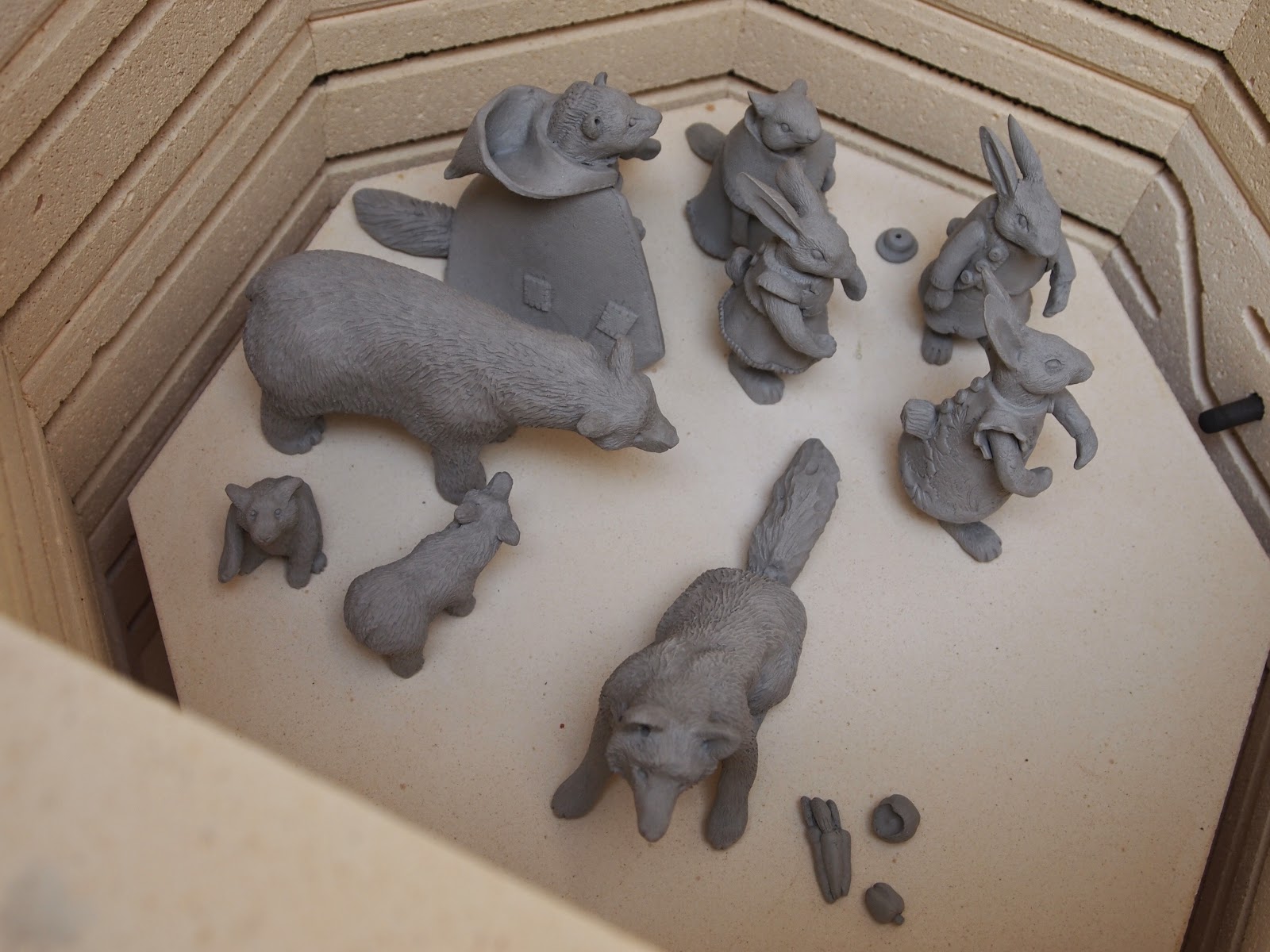 Here's the next group of my little sculptures, loaded into the kiln and read for their first firing.  Clockwise from the left, there's a mama bear and her two cubs, a skunk monk, a chipmunk shaman, three rabbits dressed up and going to a pot luck garden party, the three little vegetables that they'll be carrying, and a fox.

Ironically, it will take about as long to glaze them as it did to sculpt them in the first place!
Posted by Kaaren at 8:38 PM No comments:
Email ThisBlogThis!Share to TwitterShare to FacebookShare to Pinterest 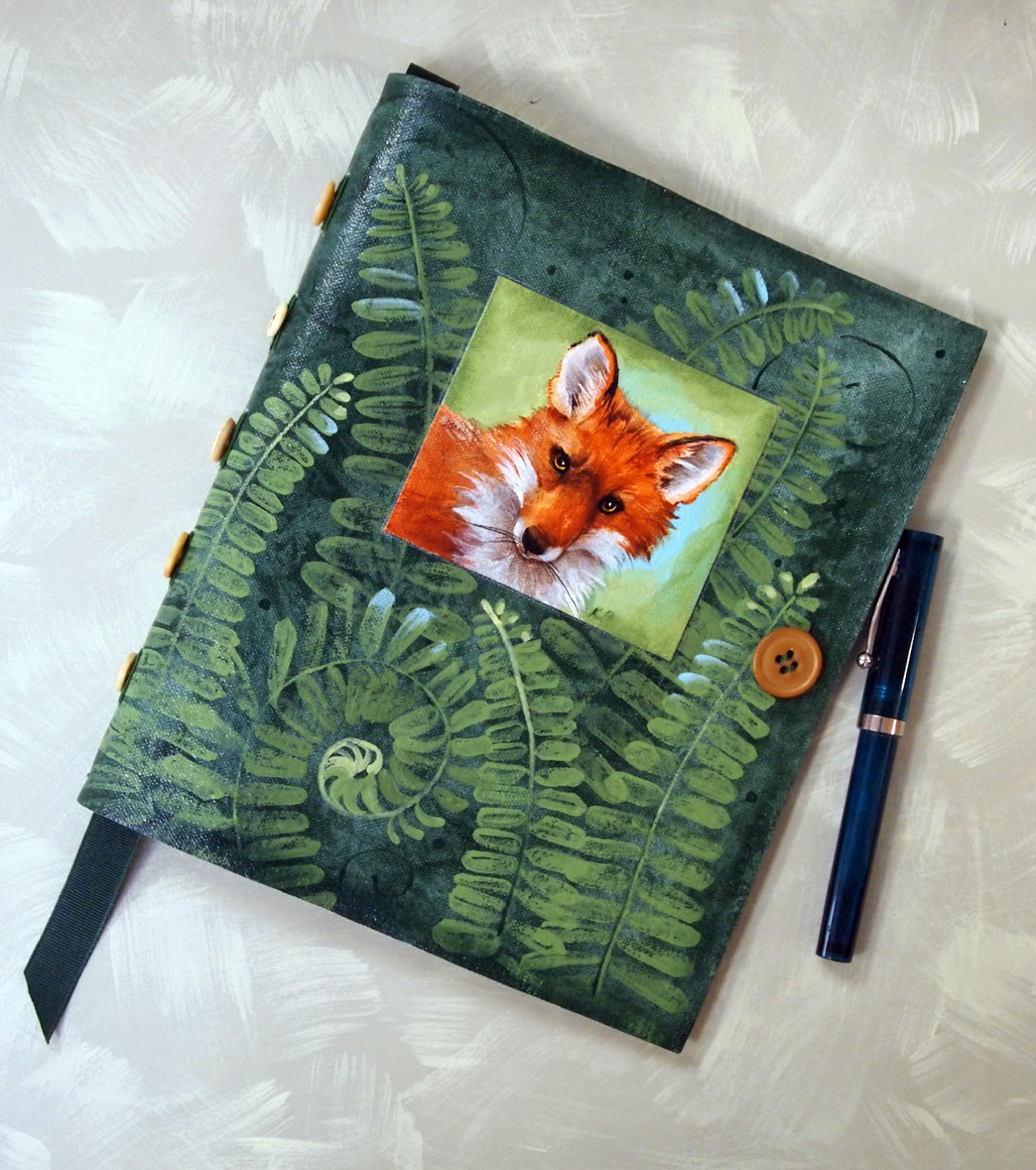 The fox journal is finished now and I'm very happy with it.  I really like these wide format journals.  For the paper, I used 8 1/2" by 14" paper folded in half, so the pages are more square, which is great if you're doing a bit of sketching as well as writing.
The buttons are vintage horn, bone, and "vegetable ivory" buttons which all have those nice warm nutty colors that go so well with the colors in the fox.
Here's a close-up of the fox portrait - the most fun part!﻿ 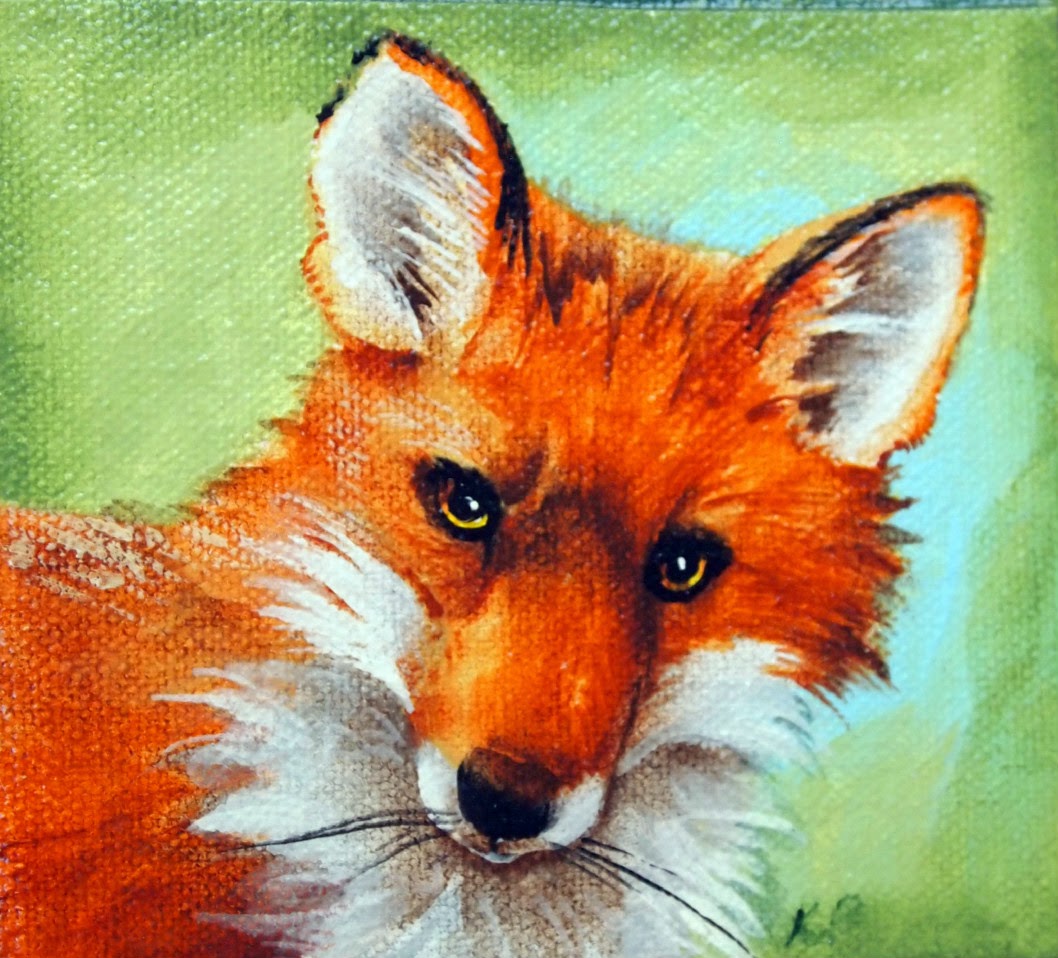 Posted by Kaaren at 2:58 PM No comments:
Email ThisBlogThis!Share to TwitterShare to FacebookShare to Pinterest

Fox in the Ferns 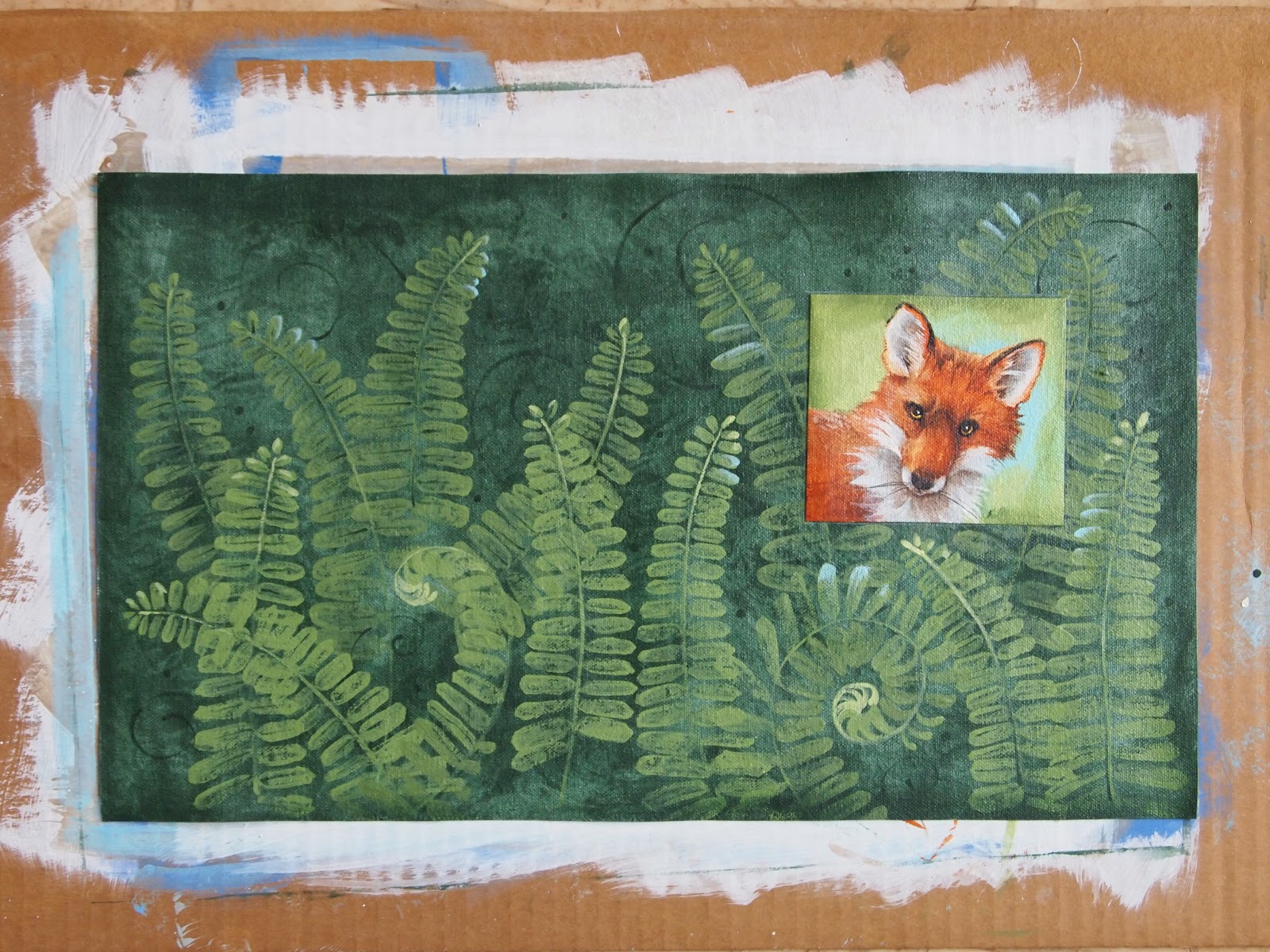 It seems time to make a few journals, so here's the first one I'm working on.  What I really like about making them is how freeing it is.  It's painting, but not painting anything formal, like a picture.  It's painting a useful object, and it seems that all the rules that usually pertain to something so "serious" as painting on canvas are gone.  It's a chance to be decorative and imaginative and just have fun with it.

So I started as I usually do, with rag rolling the dark green background.  (By the way, the fox is on a separate, small piece of canvas that I glued on later.)  Then I started on the ferns.  I painted the upper ones first, then moved downwards, and as I did so, I used progressively lighter greens.  The most fun were the two unfurled ones.  For a final touch, I added a few dark green swirls and dots here and there, though you really can't see them in this photo.

Then it was on to the fox.  For a bit of color variety, I added small amounts of turquoise around his head, then blended to light green.  I think I got his nose a little long, but he looks pretty good all in all.  I used matte medium as the "glue" to attach him to the background piece, then finished it with three coats of satin varnish.  The other side is just the plain, rag-rolled green texture, but also finished with three coats of varnish.
Posted by Kaaren at 9:00 PM No comments:
Email ThisBlogThis!Share to TwitterShare to FacebookShare to Pinterest 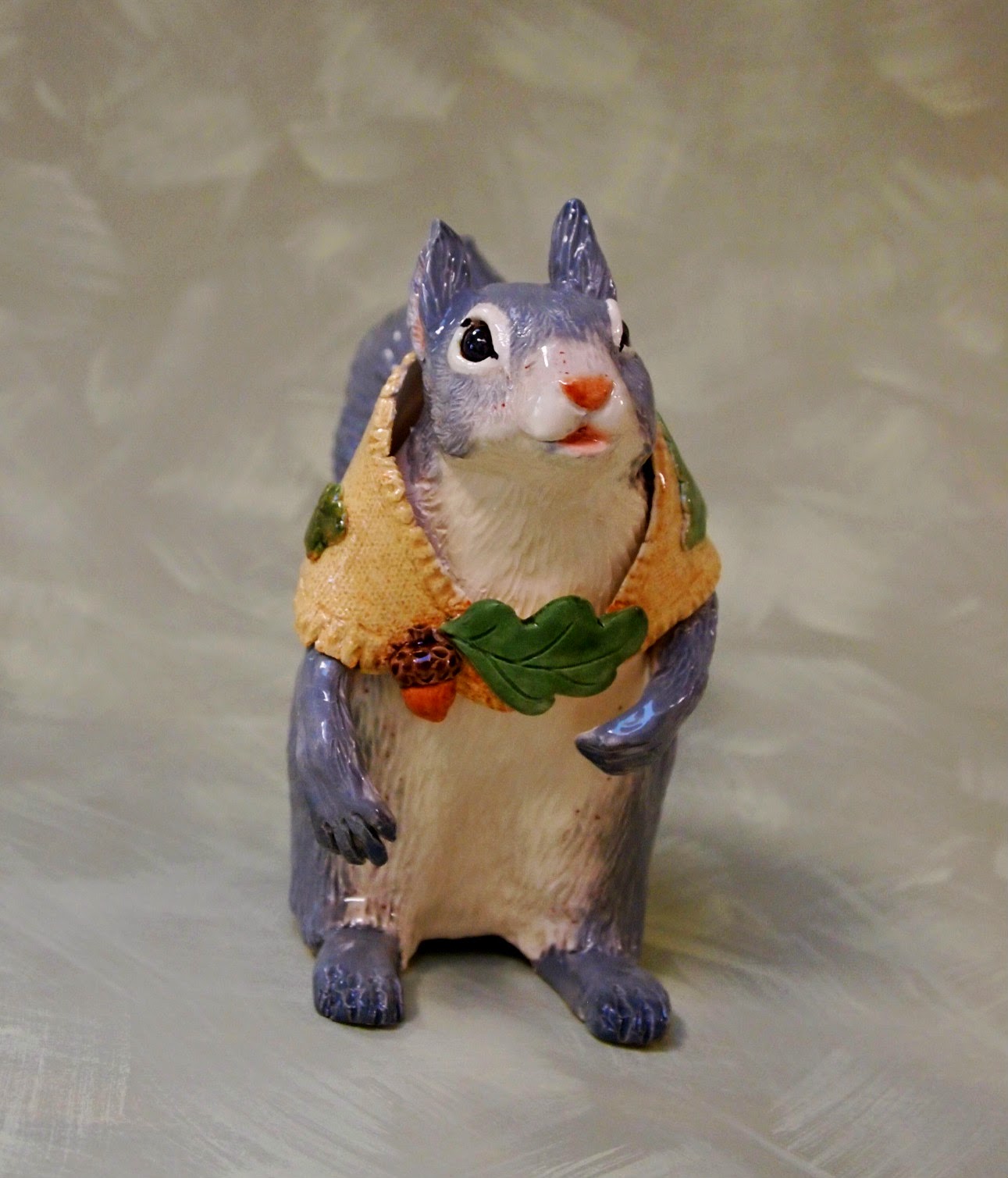 I glazed the squirrel, so she's finished now.  She turned out pretty cute, I think, and I'm also very happy with her oak-embellished shawl.  She's all ready for winter weather.
There is something so captivating about the sculpting process.  You begin with a lump of clay, pinch here, push there, smooth, and pretty soon you have something somewhat evocative of a squirrel.  From then on, she leads you!  As you work, your hands get to know the subtle differences in the wetness of different lumps of clay and what you can do with them.  Sometimes you have to let them rest a bit, and other times you can push forward.
I remember the time, not so many years ago, when I said to myself that ceramics is one thing I would certainly never get into.  How wrong we can be, even about the subject we think we know best about - ourselves!﻿ 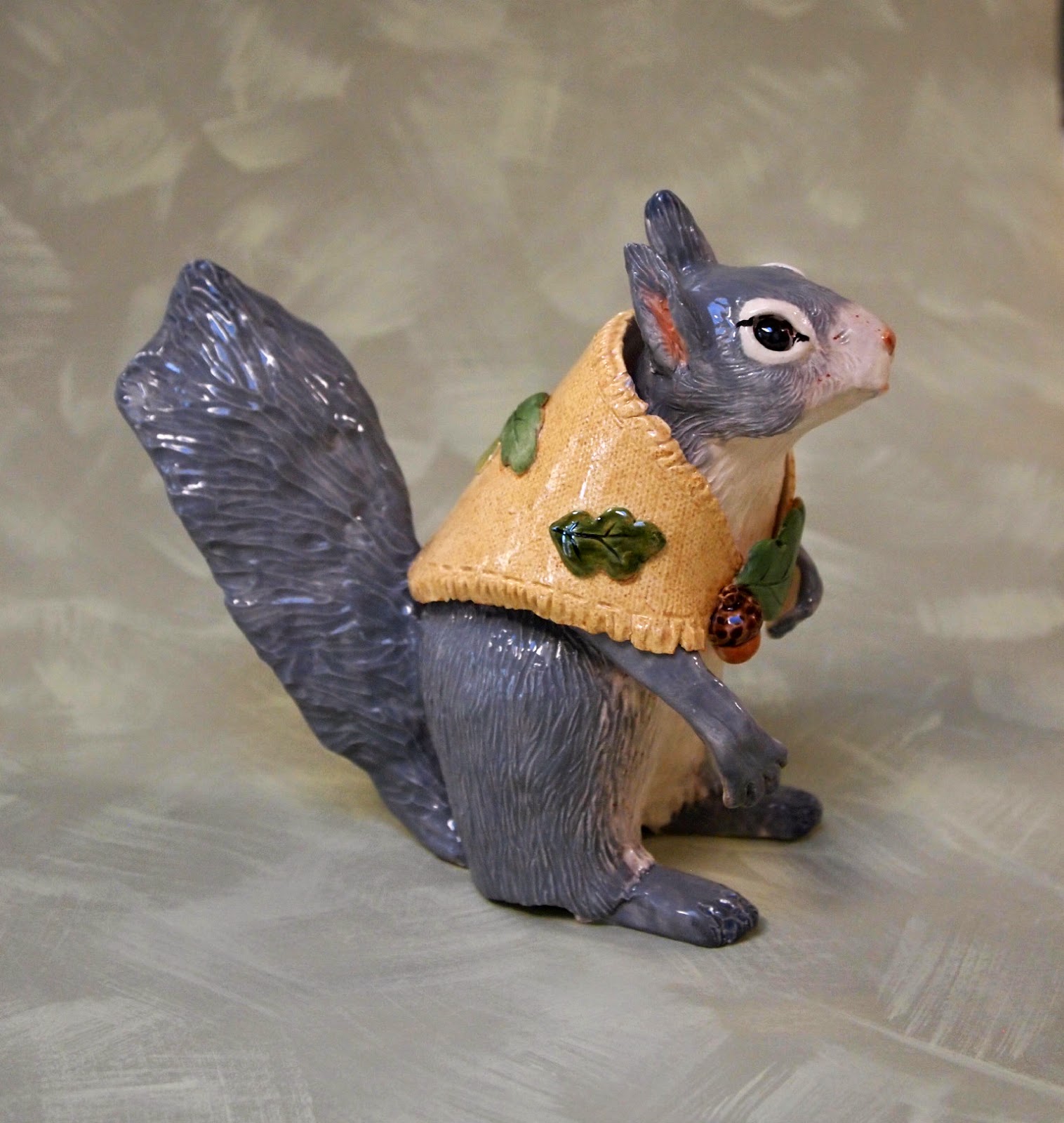 Posted by Kaaren at 4:11 PM No comments:
Email ThisBlogThis!Share to TwitterShare to FacebookShare to Pinterest 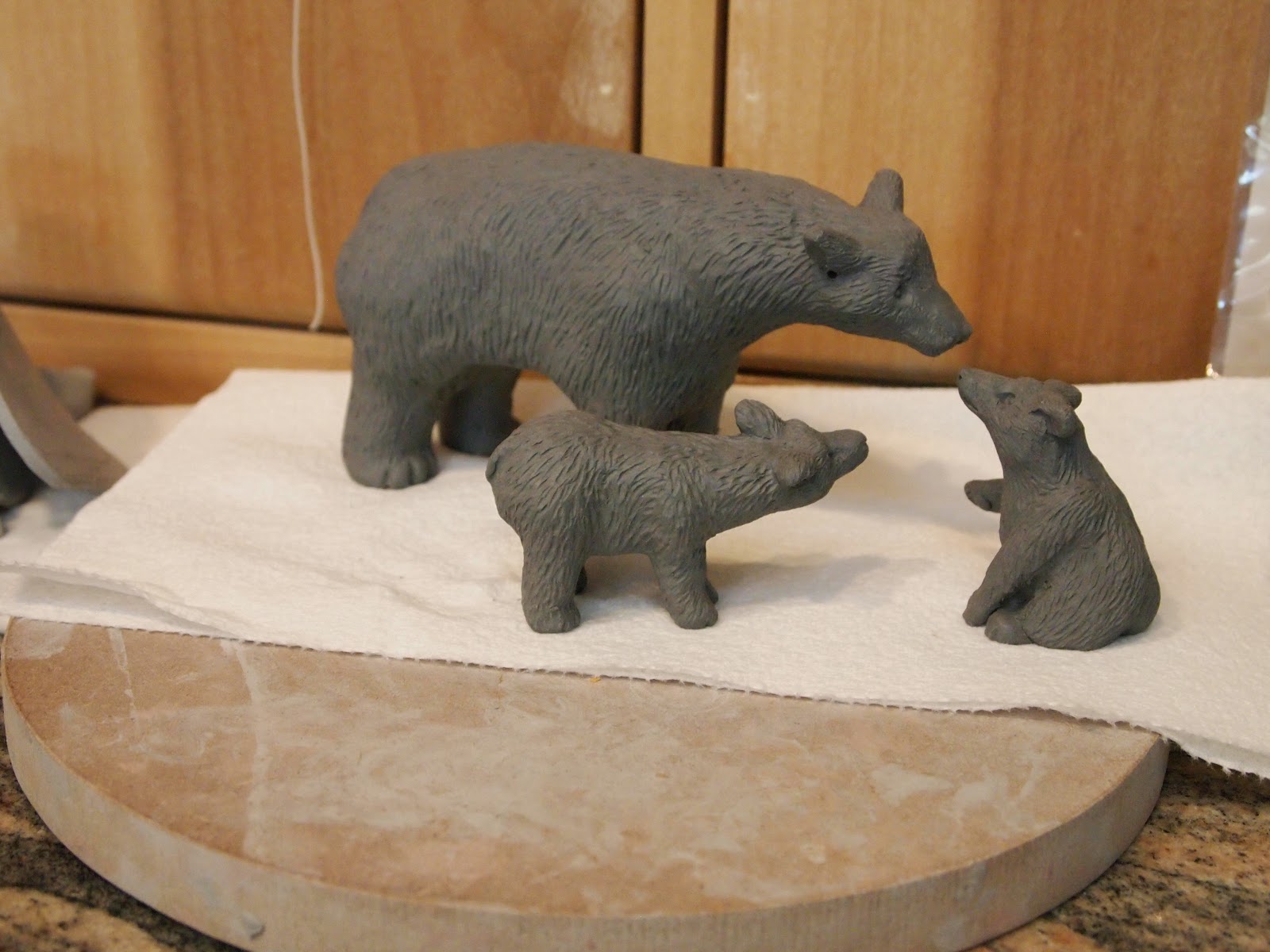 I've been doing more sculpting, getting another batch of little pieces ready to go into the kiln Sunday night.  Here's the bear family I made.  I've also sculpted a "skunk monk" and a chipmunk waif.

As for the bear family, my sister inquired as to the whereabouts of the papa bear.  The answer is that he's off somewhere else, pursuing his own life.  The dad bears are actually a danger to the cubs!

Also as for the bear family, the glazing will be a real challenge as I don't have a low-fire brown glaze that I like that much.  And I've looked and looked.  So I'm considering making them "spirit bears."

Spirit Bears are a unique community of black bears that live in the coastal forests in British Columbia.  A small percent of them - around 10%, I think - are white.  These are not albino bears, but black bears with white coats.  Actually, black bears occur elsewhere in many different colors, ranging from light cinnamon all the way to black.  But as far as I know, British Columbia is the only place where there are white ones.  They live in native American (continent, that is, not country) territory and so are well protected from the disturbing onslaught of tourists.  I'd like to see on some day, but I know I'm not up to the rigors of the required journey.  So I must be content with seeing them in photographs and in my imagination.
Posted by Kaaren at 8:46 PM No comments:
Email ThisBlogThis!Share to TwitterShare to FacebookShare to Pinterest 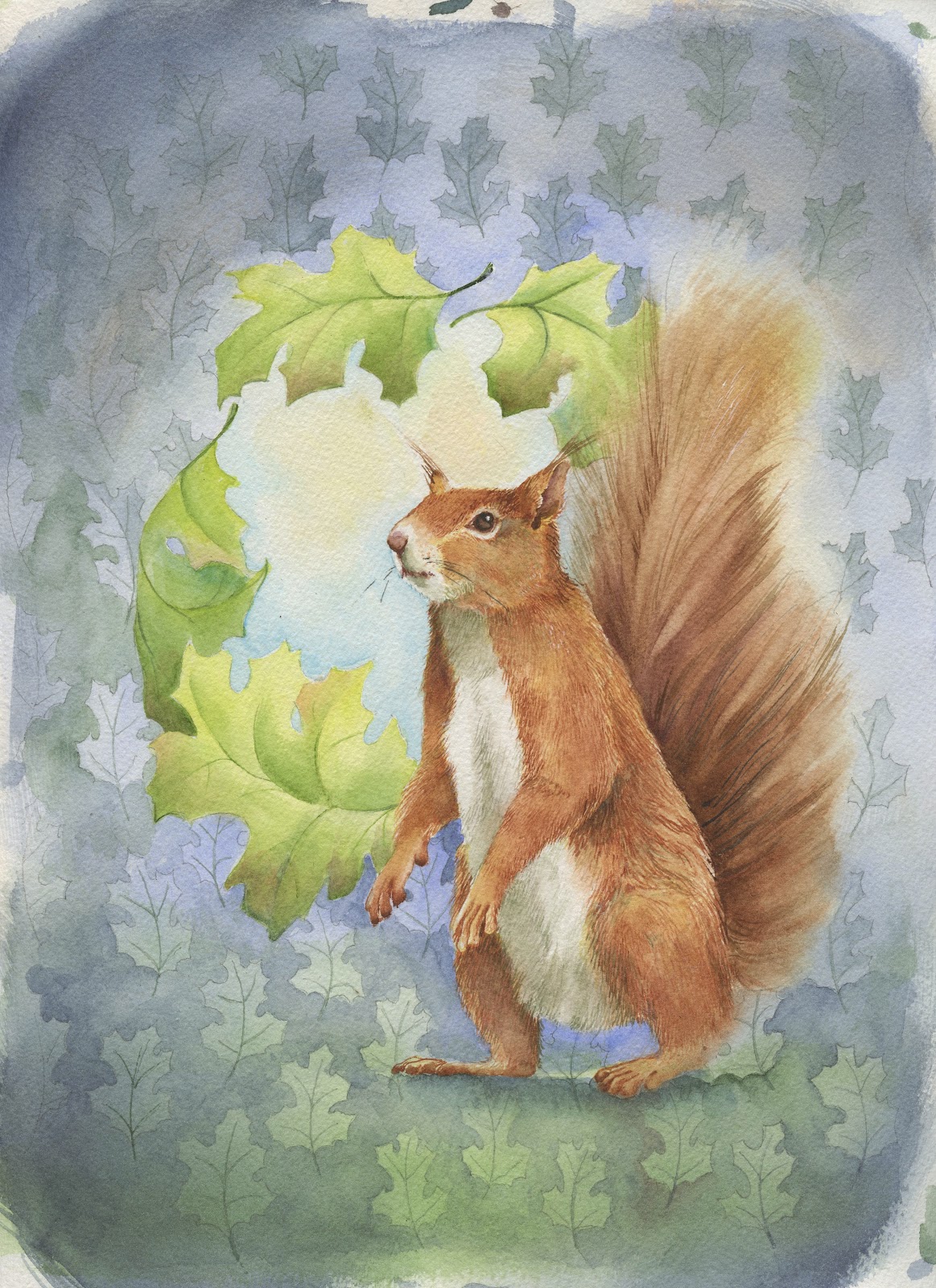 Now I've worked on my squirrel for a second day.  I felt that I needed more in the background and, since I always like a decorative element, I went for a tapestry of oak leaves.
I began by drawing them all in.  My idea was to paint around them with a light wash, leaving the leaves slightly lighter than the surrounding areas.  I began at the lower right.  Immediately I had that same old problem of varying tones since I hadn't mixed a bunch of wash first.  But I didn't realize that problem right away.  Or I was too lazy to stop and do it!
By the time I worked around to the upper left I was very frustrated and decided to switch to painting the leaves rather than the background.  And, surprise! I rather liked the effect.
To me, this painting doesn't seem quite finished, but I'm not sure what more to do.  It looks better cropped - isn't that always the case?!﻿

Posted by Kaaren at 8:17 AM No comments:
Email ThisBlogThis!Share to TwitterShare to FacebookShare to Pinterest

A Day of Watercolor 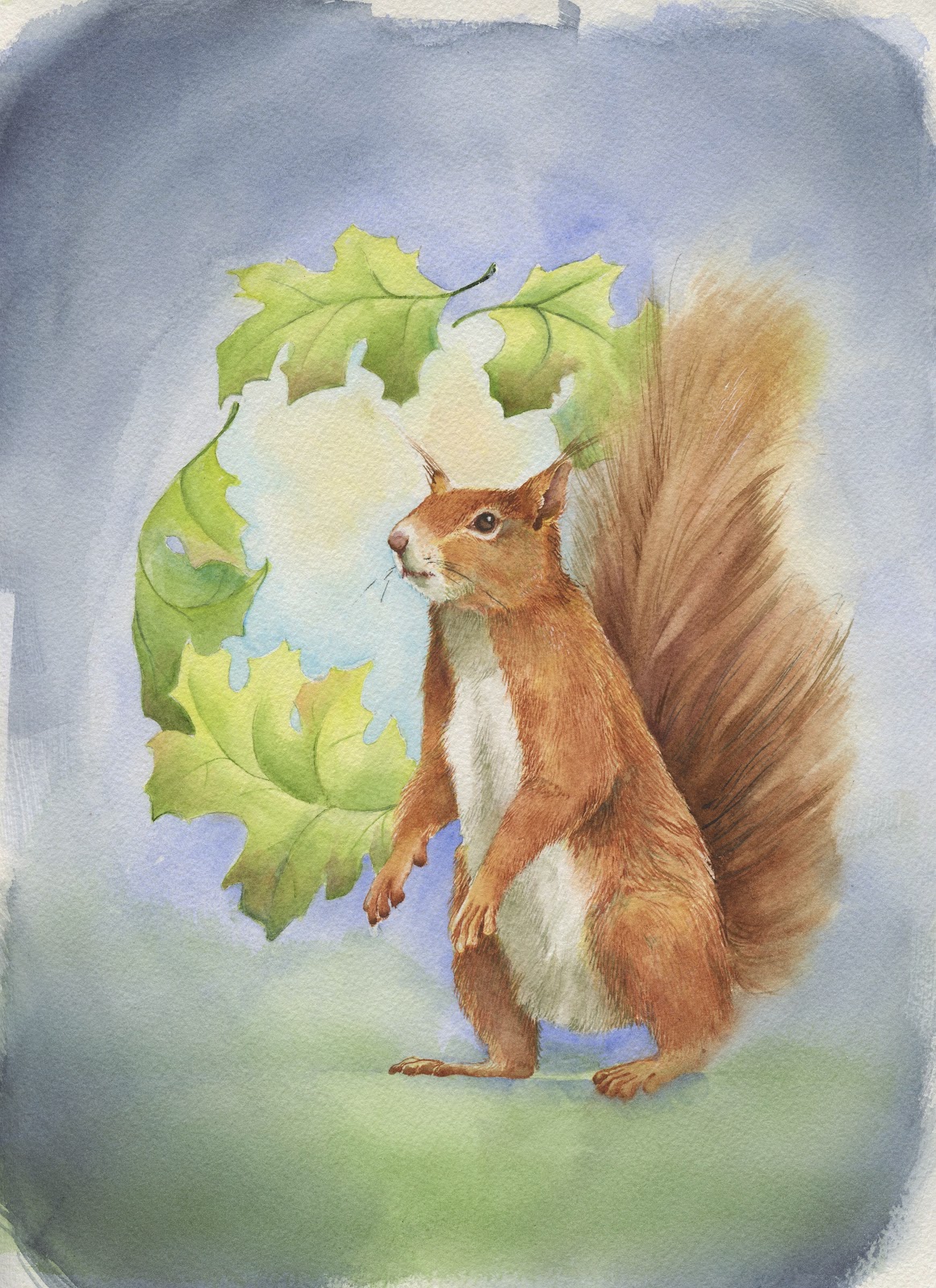 This past weekend our local art group had our quarterly Art Camp.  We rent an art classroom at the local community college and get together for three days of uninterrupted art.  Each of us works on a project of our own choice.  We enjoy each other's company, and learn from each other as well.  This past camp we had people working in clay, watercolor, acrylic, and pastel.

I decided to work in watercolor.  I don't do much of it and these three days would be a good opportunity to get in some practice time.  I chose to paint a squirrel and did a careful drawing before I transferred it to the watercolor paper, but the point was really to pay attention to the watercolor technique itself.

The biggest problem I had was the color in the background.  Getting an even tone is something I find nearly impossible, especially when I am working around the subject and, therefore, are working rather slowly.  I know I could mask the squirrel and leaves, but I don't know how I would mask the fuzzy tail, so I just decided to go ahead working around things.

The one conclusion I came to is that it would have been a lot easier if I had prepared a large pool of paint of the right consistency.  Without doing so, I was taking more time than I needed to in loading the brush - giving the painted edge I had just done more time to dry, which leaves an undesirable sharp edge.  And also the saturation of the color was different from one load to the next.﻿
Posted by Kaaren at 4:25 PM No comments:
Email ThisBlogThis!Share to TwitterShare to FacebookShare to Pinterest
Newer Posts Older Posts Home
Subscribe to: Posts (Atom)