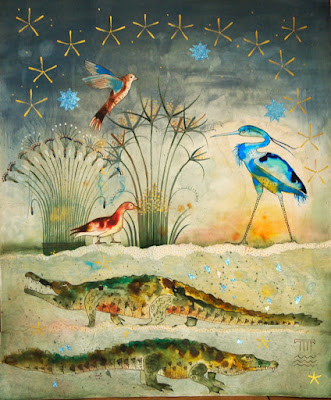 To finish the piece I detailed the birds, strengthened the colors in parts of the reeds, added the foil stars and smaller bits of foil around the crocodiles, brightened behind the heron, added gold touches including the gold starts in the sky, and placed the inscription at the bottom left.  The inscription is supposed to mean "rain over the river."

I'm quite attached to this piece but can't fully explain why.  I like the mood, but there's more to it than that.  Something mysterious.

Posted by Kaaren at 4:36 PM No comments:
Email ThisBlogThis!Share to TwitterShare to FacebookShare to Pinterest 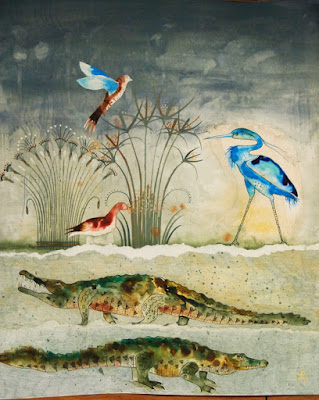 I glued the three pieces - the two crocodile strips and the larger piece with the heron - together.  This was not easy because the paper was pretty heavy (Strathmore Mixed Media paper) and a bit warped.  The moisture of the glue (I used Liquitex Matte Gel Medium) also warped the paper a bit.  I had to keep pressing the three pieces together with my fingers for quite a while until the adhesive took hold.

At that point, I had a pretty wavy and warped piece.  So I spread a towel on my kitchen counter and laid the piece upside down on the towel.  I sprayed the back with water and covered it with a few layers of paper towels.  Then I topped the whole thing off with heavy books and let it dry overnight.  In the morning, it was flat!

Then I began the painting.  I wanted a dark stormy sky and used opaque paint, using a couple of slightly different colors, and a couple of graduated layers, one over the other.  I blotted the second layer with a damp paper towel for an uneven look.

The most fun part of this painting was the reeds.  It was exacting work with a liner brush.  I used photos of ancient Egyptian tomb paintings for inspiration, but added my own touches.

I realized I needed something more, so I painted (Daler Rowney acrylic ink dropped on a shape painted with cleear water)  the two birds on a separate piece of paper.  I tore out the duck and glued it in place.  I usually prefer tearing to cutting, but I cut out other bird because I wanted to preserve all the background around it.