Back to it, and Glad of it! 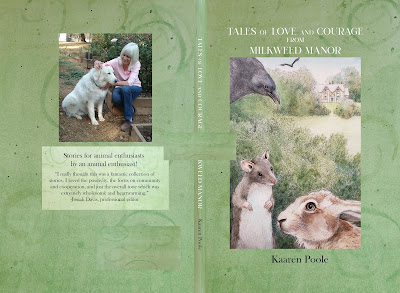 It's been many months since I last posted. I had committed to focusing on writing and illustrating my book and was into the writing stage. Somehow, I just couldn't figure out what to say about writing! In the past, writing about doing art came naturally, but without an image to write about I was lost. So I took the simple route and gave up!

But now I'm back, and determined to post regularly, once a week. I'm on Facebook more often (links in the right margin). But I plan to go into more depth here. So I hope you'll find your way back to me - as well as following me on Facebook - and enjoy what I have to share. And please know I'm really interested in hearing from you. One-way conversations can be pretty boring!

The image is the cover of my book, Tales of Love and Courage from Milkweed Manor. Just last week I finished it and listed it on both www.amazon.com and www.lulu.com/shop. It's a series of 9 stories about the same group of characters - animals living in a forest community behind an old English manor house. It's 46,000 words (about 150 pages) with 34 illustrations. It took me nearly a year, and it's an accomplishment I'm proud of. I'm proud of the story and the illustrations, but also that I was able to stick to it and get it done and out there in the world. The writing was the easiest. The illustrations posed some challenges. But the self-publishing was quite an ordeal - an ordeal that will be less so next time!

As far as the writing goes, joining an on-line writers' support group, the Author Transformation Allance (Facebook) led by Audrey Hughey, was indescribably helpful. Thank goodness I was already in the group when I realized there was so much to know. Audrey and the group were there to support me. Through that group I began to truly realize how much help there is out there if one just reaches out for it.

There's kind of a lot to say about the illustrations,, so I'll save that for another time - or, more likely, many more other times.

Now that I've been through the mechanics of self-publihsing it doesn't seem that mysterious, but at the time it had me stumped time after time. I made so many mistakes and took so much time correcting them. But I'm glad I went through the process. I learned so much and now I can do it again. Many self-published (also called "indie") authors hire out much of the process, including many levels of editing, cover design, book formatting, uploading to the print-on-demand companies (like the Kindle Direct Publishing division of Amazon  or Lulu), marketing, and so on. I made the decision early on to do as much as I could myself. In fact, the only thing I hired out was line editing and, of course, I had five volunteer beta readers to whom I am most grateful. The benefit is having more control over both the process and the timing.

I've already started on the second book in the series, as well as a Christmas book for next year. Writing and illustrating just feels right, and it's very exciting!

PS To see my book, select the link on the right to my books on Amazon (the top image, the one of my book cover), or go to www.lulu.com/shop and search for Kaaren Poole. For the next month or so, Lulu is the only place the hardback version will be available.

Posted by Kaaren at 4:17 PM
Email ThisBlogThis!Share to TwitterShare to FacebookShare to Pinterest